Preview: A Box of Bones and Two of the Forty Martyrs of England and Wales 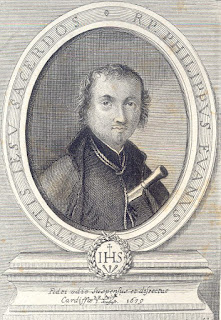 Anna Mitchell asked me to come on the Son Rise Morning Show Monday, April 19 to discuss an announcement about Saints Philip Evans, SJ and John Lloyd, two of the Forty Martyrs of England and Wales. I'll be on at my usual time, about 7:50 a.m. Eastern/6:50 a.m. Central. Please listen live here or on your local EWTN affiliate.
About 150 years ago, a box of bones was discovered at the Holywell Shrine in Wales--St. Winifrede's Well, a place of pilgrimage and healing for centuries before the English Reformation and even after Henry VIII's suppression of the nearby Basingwerk Abbey and closure of the shrine.
Please note that Henry VIII's father (Henry VII) is believed to have visited Holywell before the Battle of Bosworth and that there is evidence that his grandmother, Margaret Beaufort, may have contributed to the building of the structures at the shrine remaining today. It always startles me how Henry VIII not only broke away from the universal Catholic Church (redundant I know) but also with his family's recent history and heritage.
Even though Henry VIII closed down the shrine, had St. Winifrede's relics destroyed and suppressed the abbey, Holywell remained a site of pilgrimage and of Catholic hope. Blessed Edward Oldcorne, SJ, another martyr, like Saints Evans and Lloyd, who suffered after the Gunpowder Plot was discovered in 1605, had traveled to Holywell when suffering from throat cancer during his sixteen years of missionary work--and was cured. The Gunpowder Plot conspirators visited the shrine. James II and his queen, Mary Beatrice of Modena visited the shrine in hopes of conceiving a son and heir--and their hopes were fulfilled.
Distant as Wales is from London and the center of England's administrative and judicial power, both secular and Jesuit priests were able to maintain their missions in Holywell in the seventeenth century until the great panic of the Popish Plot in 1678 and 1679. The last of the 40 Martyrs of England and Wales were the six priests arrested in and near Wales in the general hysteria of the Popish Plot: Philip Evans, SJ, David Lewis, SJ, John Wall, Franciscan, John Kemble, John Lloyd, and John Plessington. They had nothing to do with the Popish Plot (they couldn't anyway, since there wasn't any conspiracy to assassinate Charles II) and most of them had been serving as missionary priests in that area for years.
As the Jesuit Collections website describes the discovery of the bones:
In 1878 a discovery was made in an attic of the Jesuit priest’s house in Holywell. A wooden box containing two skulls, and a variety of other bones wrapped in an ancient linen jacket. One of the skulls had a large hole in the cranium. Some of the bones showed evident signs of having been cut with a sharp knife. This indicated that these bones related to two individuals who had been hanged, drawn and quartered, and whose bones had been hidden for safety, possibly for two centuries.

Fr Morris was invited to investigate and made this drawing. He speculated that they were martyrs because of the age of the bone and the fact that they had been hidden in a Jesuit house, but made no suggestion as to their identities.

So whose bones were they? And why were they kept together?
The source of the mystery about these bones is that there was no documentation in the box with them; their provenance was not clearly indicated--where they had been, how they'd been saved, why they were wrapped in a linen jacket, much less whose bones they were--all unknown.
Dr. Jan Graffius, Curator of Stonyhurst College, believes they might be the bones of Saints Philip Evans, SJ and John Lloyd. She has assembled the evidence of the bones, the style of the  linen jacket, where the bones were found, the fact that two persons' bones are together, the difference between the treatment of the bones, etc., to come to that conclusion. As she comments in this CNA story:
“The starting point is you look at the evidence in front of you,” she told CNA in an interview. “So you have two skulls. One has a hole in the cranium, and many of the bones that are associated with the two skulls show evidence of having been cut with a sharp knife.”

“The immediate premise that you draw from that is that at least one of these two was dismembered after death and that one of the heads was stuck on a spike.”
Acknowledging that the details were “quite graphic,” she continued: “I examined the skull to see whether the hole in the top had been inflicted from the outside in or from the inside out. And the way the bone had been damaged indicated that the force had come from within the skull, within the cranium itself. It had also been pierced by something from inside, like a spike.”
“The clinching argument was that the coccyx . . . -- the bone at the base of the spine -- had been severed very cleanly. And when you’re hanging, drawing, and quartering, the quartering is literal: you cut the body into pieces. And that indicates to me where you would normally expect the cuts to come from severing the legs from the body.”
She consulted with other experts, Maurice Whitehead of the Venerable English College in Rome and Hannah Thomas of the Bar Convent in York and they suggested that these bones could be the relics of Saints Evans and Lloyd:
“They both said, ‘Look, this must be Evans and Lloyd because they were very closely associated in life.’ They spent their last six months or so together in prison. They were executed at the same time. They were buried, or disposed of, at the same time, and they are always spoken of as a pair, if you like, because of the close friendship they had during life.”

“So it makes perfect logical and historical sense for these two bones of these very closely associated men to have been rescued together, and secreted together.”
It is not an absolutely certain conclusion, based on Graffius' inductive reasoning: no DNA has been processed; no familial DNA has been gathered to compare, and there is no indication that there's any plan to pursue this method of investigation. As she concludes the CNA interview, she has "a good degree of confidence" that these bones are the relics of Evans and Lloyd.
But what this effort to identify these bones reveals is the horrible violence of the execution of these priests, especially of Saint Philip Evans the Jesuit and the first to be hanged, drawn, and quartered--perhaps to persuade Saint John Lloyd to deny his faith--and the care Catholics took after their executions to find their bodies, bury them, perhaps disinter their bones to prevent them being found, keep them safe as relics, etc. 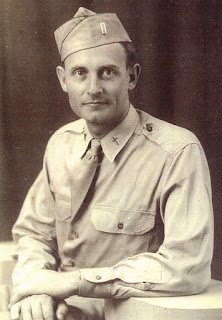 In my home diocese, Wichita, Kansas, as Matt Swaim and Anna Mitchell have mentioned, the remains of Servant of God Chaplain Emil Joseph Kapaun have definitely been identified through DNA matching. The Kapaun family have been working closely with the diocese and the decision has been made to have his remains interred in a crypt in our Cathedral of the Immaculate Conception. As our diocesan paper, The Catholic Advance, notes, this:
would not only provide a safe and secure location for them, but would also allow opportunities for Catholics and many others inspired by Fr. Kapaun’s life to be able to visit and venerate this priest, whose cause for sainthood progresses. In 1993, Fr. Emil Kapaun was named a “Servant of God”, which signified that his cause for canonization could begin. Fr. Kapaun’s placement in the Cathedral will be a temporary location in the event that the Church recognize him as a saint in the future, in which case a dedicated shrine or chapel might be erected to hold his remains and commemorate his life.
I cite this just as a comparison between a proven identification and a likely identification.
Saint Philip Evans, pray for us!
Saint John Lloyd, pray for us!
Servant of God, Emil Kapaun, pray for us!
Image Credit: Saint Philip Evans, SJ (used under a CC BY-SA 3.0 license)
Image Credit: Then Second Lieutenant Emil J. Kapaun (Public domain)
Posted by Stephanie A. Mann at 12:00 AM