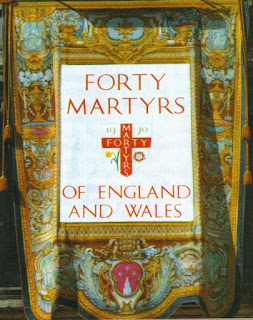 Just a reminder that I'll be on the Son Rise Morning Show this morning to discuss the possible identification of the relics (bones) of Saints Philip Evans, SJ and John Lloyd, two of the Forty Martyrs of England and Wales. I'll be on at my usual time, about 7:50 a.m. Eastern/6:50 a.m. Central. Please listen live here or on your local EWTN affiliate.
And here's a reminder of their stories from the series Anna, Matt, and I did last year to tell the stories of all the 40 Martyrs of England and Wales during the 50th anniversary year of their canonization:
While neither of them was accused of being involved in the Popish Plot, Evans and Lloyd were arrested because of heightened efforts in England and Wales to find Catholic priests, even if they had been serving their flocks, like Saint John Lloyd, for many (24) years. Saint Philip Evans, SJ was a more recent recruit to the Catholic mission, having served only four years. . . .

The martyrs were both arrested in late 1678, imprisoned in the Castle Gaol in Cardiff and finally tried in May, 1679. They were executed together on July 22, 1679 in Pwllhalog, near Cardiff at a site known as the "Death Junction".

The Friends of the Ordinariate blog offers these profiles of the two priests:

St. John Lloyd, the older of the two saints by some 15 years, was born at about 1630, and went to the Royal English College at Valladolid, being ordained priest on 7th June 1653. The following April he returned to Wales, and spent 24 years ministering among the Catholics of Glamorgan and Monmouthshire operating over a vast area. His brother was also a secular priest: Fr William Lloyd, who was also imprisoned in the Titus Oates plot, but died as a result of his torture before he was executed.

John Lloyd was arrested 20th November, 1678 and placed in solitary confinement, until being united in a cell with the younger Philip Evans.

St Philip Evans was born in Monmouthshire in 1645, studied at St. Omer, in France, and was ordained for the Society of Jesus in 1675. He immediately returned to Wales, and spent the next four years administering the Sacraments around Abergavenny, in his native Monmouthshire, staying in various different houses and continuing largely unmolested. He stayed at Sker House, with the Tuberville Family, where he was eventually arrested, in the wake of the Titus Oates plot. His betrayer was the younger bother of the owner of the house. He was arrested on the 4th December, 1678. He was then taken to Cardiff and imprisoned in the Castle Goal. For the first few weeks of his incarceration he was in solitary confinement, before being put in the same cell as Fr. John Lloyd. They were imprisoned until trial in May of 1679.

Their trial found them guilty of being priests, and they were sentenced to be hung, drawn and quartered on the 9th May, 1679. It was not, however, until July that the sentence was decreed to be carried out. Philip, a light hearted man, was found playing tennis (they were allowed quite a bit of liberty) on the 21st July when news that the execution was to take place the following day reached him. The jailer told him he should return to prison, to which he responded “what haste is there? First let me play out my game!” which he duly did.

Philip was also a fine harp player, and when his jailers came to collect the two priests on the morning of the execution, they found Philip playing his harp, in spite of his leg shackles. These shackles took an hour to remove, so tight were they, and caused him excruciating pain.
According to this blog honoring the Welsh martyrs, St. Philip Evans was executed first:
When he mounted the scaffold Fr Evans said; “This is the best pulpit a man can have to preach in, therefore, I cannot forbear to tell you again that I die for God and for Religion’s sake.” He addressed the crowd in English and in Welsh, then turning to Fr Lloyd, who stood waiting his own turn, he said, “Adieu, Mr Lloyd! Though only for a little time, for we shall soon meet again.”
St. John Lloyd suffered hanging, drawing, and quartering after him.
St. John Lloyd, pray for us!
St. Philip Evans, pray for us!
Posted by Stephanie A. Mann at 12:00 AM