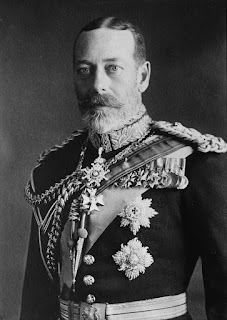 Let's just file this under the category: Learning Something New Each Day. I was doing some research before responding to a post about the death of Prince Philip on Facebook--someone had said it would still be an act of treason if a Catholic persuaded an heir to the throne (Prince Charles or Prince William, especially) to leave the Church of England for the Catholic Church. I thought that such penal laws had been repealed with the Catholic Emancipation Act of 1829, which was given Royal Assent by King George IV on April 13 of that year. I knew that Act left some disabilities for Catholics yet to be removed, but I had not heard of or studied the Catholic Relief Act of 1926, to which King George V, Queen Elizabeth II's grandfather, gave his Royal Assent on December 15 of that year. Mea culpa, mea culpa, mea maxima culpa!

According to the Encyclopedia Britannica the 1829 Emancipation Act left these protections of the Protestant religion of the Church of England in place:

In 1829 this carefully restricted freedom again to practise the proscribed religion was extended by the statute commonly known as the Catholic Emancipation Act (io Geo. IV., c. 7). It further disestablished oaths and declarations against Transubstantiation, the invocation of saints and the sacrifice of the mass, by making such oaths and declarations no longer a qualification for member ship of parliament or the holding of any office, franchise or civil right, except offices in or connected with the Established churches, or in any educational institution in regard to which such oaths obtained. But a new oath, against any attempt to subvert the Protestant religion, was imposed upon Members of Parliament, naval, military and municipal officers and electors. Priests were forbidden to sit in the House of Commons, but all civil and mili tary offices were thrown open to Catholics, except the regency of the kingdom, the lord chancellorship, the lord-lieutenancy of Ire land and the high commissionership of the Church of Scotland.

Also they could not present to livings in the Church of England.

Many other restrictions upon religious liberty were maintained. Judicial and municipal officers were forbidden to attend in their insignia any public worship, except in a building of the Established Church; priests and monks were prohibited from conducting ceremonies or wearing habits save in their churches or private houses. Jesuits and all other male persons under religious vows already in the country were to register themselves—they did so for many years—and the entry into the country of those not already there was forbidden, with the exception of those of them who, being natural born British subjects, had left the country temporarily, and of others who might get a licence from a Protestant secretary of State to come into the country for a period not exceeding six months. To admit a person into a religious order was made a misdemeanour; the admitted person was to be banished for life, and transported for life if he had not gone within three months after the sentence of banishment. An attempt (apparently the only attempt) to enforce this law against religious orders was made as late as 1902, but the magistrate refused a summons and was upheld by the High Court : R. v. Kennedy; 86 Law Times Rep. 753. In 1898 parliament had declined to pass a bill for repealing the law, but it has now been repealed by the Roman Catholic Relief Act, 1926.
Please read more here from the same source about attempts to address such limitations on Catholics.
The Roman Catholic Relief Act of 1926 removed other disabilities against Catholics that were not being enforced:
Disabilities still remained however, and in 1926 yet another repeal Act was passed, the Roman Catholic Relief Act, 1926 (which however does not apply to Northern Ireland). The enactments repealed by this latest legislation are, in addition to the repeal of the law against religious orders already referred to, as follows:—The Act of forbidding the possession of Catholic liturgies and books of devotion and statues, is repealed. The Religious Houses Act, 1559, which declared religious orders to be superstitious, and gifts for their benefit therefore voidable, as being for a superstitious use is also revoked. So is the Act of 1715, above referred to, for appointing commissioners to raise money out of recusants' estates. Then the Relief Act of 1791 was made more fully relieving by removing from it the section which forbade steeples and bells in Catholic churches and prohibited a priest from officiating at funerals in (presumably Protestant) churches or church-yards, or from exercising any rights or ceremonies or wearing the habits of an order out of doors or in a private house where more than five persons in addition to the household were assembled, or from exercising his functions at all unless he had first taken the oath of allegiance and abjuration (a similar prohibition in the Act of 1829 being also removed). From the Act of 1791 was also eliminated the section which prohibited the establishment or endowment of a religious order or school or college by Roman Catholics.
Another issue to be addressed was the offering of Masses for the Dead requested in the Last Wills and Testaments of Catholics in England:
It related to bequests for masses for the testator's soul, and the decision may be classed with the measures of legislative relief since, until 1919, when the decision was given, it had been assumed (after ineffectual attempts to obtain legal sanction for such be quests) that they were unlawful. The decision was given by the House of Lords in the case of Bourne v. Keane (Law Rep. [1919] App. Cas. 815). It overruled the leading case of West v. Shuttleworth (decided in 1835) and other cases following that decision, which had proceeded on the assumption that bequests for masses for the dead were now illegal because the Chantries Act of 1547 had confiscated gifts for such masses in existence at that time. It was held by the House of Lords in Bourne v. Keane that this was a wrong interpretation of the Chantries Act, that that Act did not govern subsequent bequests, and that with the repeal of the statutes which had made the Catholic religion illegal, the old common law legality of masses for the dead revived.

The author of the article in the Encyclopedia Britannica believes that Catholics are completely free to practice their religion in England as long as they don't interfere with the affairs of the Church of England, but he does offer a caveat to his stated confidence:
. . . it may now be said, with some confidence (but the maze of anti-Catholic legislation and the piecemeal nature and intricacies of the repeals make absolute confidence appear rash) that full liberty is now restored to the Catholic religion . . .
Doing this research of course led me to a book, which I've ordered from England through Amazon (in one of those exceptions to my rule of buying books at Eighth Day Books!):  Catholic Emancipation 1829 to 1929: Essays by Various Writers with an Introduction by His Eminence Cardinal Bourne. I am in great anticipation of receiving it and reading it later this month! One of the "various writers" is G.K. Chesterton!
Right now, I'm still being dazzled by Saint John Henry Newman's great efforts to persuade the remaining members of the "movement of 1833" to become Catholic--moving onto the section in which he attempts to remove their bad, English superiority complex influenced, views of the Catholic faith as practiced, including in so-called Catholic countries. How can the the Catholic Church be one, holy, catholic, and apostolic when it has so many bad Catholics in it? Isn't that the mystery so many Catholics wrestle with even today, much less those who may be attracted to her as the "one, true fold of Christ" (Newman's phrase)?
Happy Easter! It's still Easter: Christ is Risen; He is Risen Indeed!
Image credit (public domain): King George V in 1923.
Posted by Stephanie A. Mann at 12:00 AM