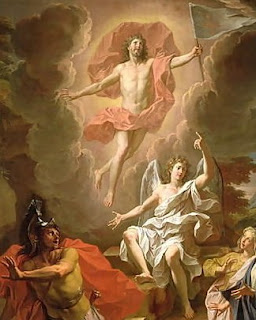 As promised, I'll be on the Son Rise Morning Show with Matt Swaim at about 7:50 a.m. Eastern/6:50 a.m. Central to talk about St. John Henry Newman's PPS (Parochial and Plain Sermon) for Easter Sunday 1838, "Keeping Fast and Festival".

After reading and discussing eight of Newman's Anglican sermons, I think we can see his homiletic and rhetorical pattern. He always begins with a line from scripture as his inspiration for the topic he has chosen to present but he goes well beyond a simple exegesis of that quotation. For instance, in today's sermon, he chose the same line Pete Seeger/The Byrds chose: "A time to weep, and a time to laugh: a time to mourn, and a time to dance." Eccles. iii. 4. Instead of offering an explanation of the rest of that biblical passage, Newman goes on to explain what it means to Christians in the context of Easter celebrations.

He notes how the celebrations of Christmas and Easter are different--not so much liturgically but emotionally--Christmas is a warm, simple, family festive time, with many traditions, particular and universal. Easter is a deeper, richer, and even subdued celebration because the Resurrection comes after Good Friday. Good Friday and all that Jesus suffered that day are still on our minds even as we read the Gospel passages describing how St. Mary Magdalen and the Apostles discovered that Jesus had risen from the dead: slowly, tentatively, and finally, joyfully.

Then Newman explores the meaning of King Solomon's admonition to either fast (weep and mourn) or feast (laugh and dance) at the right times and in the right order. He condemns the way that the World and even some Christians fail to observe this order and deplores what it means for their celebration of Easter and the Resurrection: it will be superficial and lacking true religious feeling or there will be no religious feeling at all (no thought of Heaven or the life to come).

Continuing this explication of Fasting in Lent and Feasting in Easter, Newman explains how even in feasting, the Christian spirit is different than the World's: it is more subdued. And Newman states that it is right that it is:

This too must be said concerning the connexion of Fasts and Feasts in our religious service, viz., that that sobriety in feasting which previous fasting causes, is itself much to be prized, and especially worth securing. For in this does Christian mirth differ from worldly, that it is subdued; and how shall it be subdued except that the past keeps its hold upon us, and while it warns and sobers us, actually indisposes and tames our flesh against indulgence?

Then Newman explores the events of the Day of Resurrection and all the witnesses of Christ's Resurrection, holding St. Mary Magdalen, the Apostles, and the Blessed Virgin, holding them all up as models for our own response to that great day and the days that followed.

Finally, he delivers his exhortation to his congregation: how to live out this pattern of Easter Feasting after Lenten Fasting through their daily duties.

He exhorts them to find a balance between this world and the next, reconciling what seem to be opposites:


May we partake in such calm and heavenly joy; and, while we pray for it, recollecting the while that we are still on earth, and our duties in this world, let us never forget that, while our love must be silent, our faith must be vigorous and lively. Let us never forget that in proportion as our love is "rooted and grounded" in the next world, our faith must branch forth like a fruitful tree into this. The calmer our hearts, the more active be our lives; the more tranquil we are, the more busy; the more resigned, the more zealous; the more unruffled, the more fervent.

Newman reminds them that Christ has triumphed over sin and death so that they may also:

There is nothing impossible to us now, if we do but enter into the fulness of our privileges, the wondrous power of our gifts. The thing cannot be named in heaven or earth within the limits of truth and obedience which we cannot do through Christ; the petition cannot be named which may not be accorded to us for His Name's sake. For, we who have risen with Him from the grave, stand in His might, and are allowed to use His weapons. His infinite influence with the Father is ours,—not always to use, for perhaps in this or that effort we make, or petition we prefer, it would not be good for us; but so far ours, so fully ours, that when we ask and do things according to His will, we are really possessed of a power with God, and do prevail . . . so let us believe with full persuasion that all that He has bequeathed to us has power from Him.

(In this paragraph, Newman also explores the seeming contradiction between what Christ has done--and what the Christian can do because of it--and how all this greatness comes from small beginnings and a means of salvation and redemption no one would ever expect.)

Even as he urges them to follow Jesus as obedient disciples, Newman reminds them of the realities of suffering, torture, mockery, salvation, and triumph, demonstrating again the connections between Fasting and Feasting, even in the Easter Season:

Let us accept His Ordinances, and His Creed, and His precepts; and let us stand upright with an undaunted faith, resolute, with faces like flint, to serve Him in and through them; to inflict them upon the world without misgiving, without wavering, without anxiety; being sure that He who saved us from hell through a Body of flesh which the world insulted, tortured, and triumphed over, much more can now apply the benefits of His passion through Ordinances which the world has lacerated and now mocks.

His last words in this sermon once more balance opposites (rest and activity) as he describes the cycle of the Christian liturgical year as a reminder of all that God has done and does for us:

This then, my brethren, be our spirit on this day. God rested from His labours on the seventh day, yet He worketh evermore. Christ entered into His rest, yet He too ever works. We too, if it may be said, in adoring and lowly imitation of what is infinite, while we rest in Christ and rejoice in His shadow, let us too beware of sloth and cowardice, but serve Him with steadfast eyes yet active hands; that we may be truly His in our hearts, as we were made His by Baptism,—as we are made His continually, by the recurring celebration of His purifying Fasts and holy Feasts.

Thus Newman has maintained a tension between fasting and feasting, weeping and laughing, mourning and dancing, resting and acting, being strong and being weak, etc., throughout the sermon, even as he describes the lasting reality of things that happened long ago and yet happen now and happen every year and happen every day.

Image Credit: Resurrection of Christ, Noël Coypel, 1700, using a hovering depiction of Jesus
Posted by Stephanie A. Mann at 12:00 AM