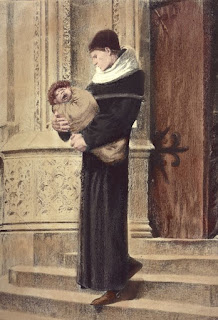 In the Ordinary Form for Latin Rite Catholics, today is Divine Mercy Sunday, the Second Sunday of Easter, the Octave Day of Easter. Each day this past week has been another Easter Day, and each day was a Feast with the Gloria chanted or recited.

In the Extraordinary Form of the Latin Rite, today is Low Sunday, or Dominici in Albis (when the newly baptized put aside their white baptismal garments), also known as Quasimodo Sunday. In the Extraordinary Form, each day of the Octave has been a first class feast and from Monday through Saturday, the Sequence has been chanted/recited after the Alleluia (Victimae Paschali Laudes/Christians, to the Paschal Victim), although it is not included in today's Mass.

Like newborn infants, you must long for the pure, spiritual milk, that in him you may grow to salvation, alleluia.

I think nearly everywhere in the USA, however, the Baptism of new adult Catholics has been delayed, perhaps until the Vigil of Pentecost, so none of the Collects for the Octave in the Ordinary Form, with their emphasis on the newly baptized, has applied as much as usual. Christ is Risen; but time seems a little out of joint.

And, as the Fisheaters website explains, there's literary connection to the Quasimodo Sunday name too:

And yes, the name of this Feast is the origin of the name of the hunchback, Quasimodo, in Victor Hugo's "The Hunchback of Notre Dame." Poor Quasimodo was a foundling who was discovered at the cathedral on Low Sunday and so was named for the Feast. He is introduced in Hugo's book like this:


Sixteen years previous to the epoch when this story takes place, one fine morning, on Quasimodo Sunday, a living creature had been deposited, after Mass, in the church of Notre- Dame, on the wooden bed securely fixed in the vestibule on the left, opposite that great image of Saint Christopher, which the figure of Messire Antoine des Essarts, chevalier, carved in stone, had been gazing at on his knees since 1413, when they took it into their heads to overthrow the saint and the faithful follower. Upon this bed of wood it was customary to expose foundlings for public charity. Whoever cared to take them did so. In front of the wooden bed was a copper basin for alms.

The sort of living being which lay upon that plank on the morning of Quasimodo, in the year of the Lord, 1467, appeared to excite to a high degree, the curiosity of the numerous group which had congregated about the wooden bed. The group was formed for the most part of the fair sex. Hardly any one was there except old women. . . .

"What is this, sister?" said Agnes to Gauchère, gazing at the little creature exposed, which was screaming and writhing on the wooden bed, terrified by so many glances.

"What is to become of us," said Jehanne, "if that is the way children are made now?"

"I'm not learned in the matter of children," resumed Agnes, "but it must be a sin to look at this one."

The infant is a misshapen hunchback but Claude Frollo, the Archdeacon of Notre Dame, brings him into the Cathedral, naming him for the day of his adoption.
Posted by Stephanie A. Mann at 12:00 AM