The Church of the Immaculate Conception, Derbyshire, in 1846 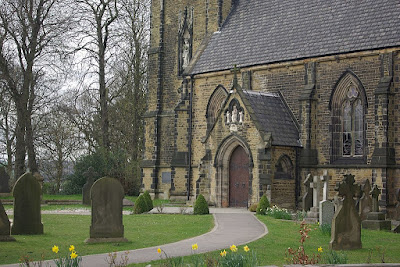 I just wanted to draw your attention to a post on the New Liturgical Movement website about the dedication of a new Catholic Church in 1846--thus after Emancipation/Catholic Relief but before the Restoration of the Hierarchy. The lengthy, excellent post was contributed by Sharon Kabel:

In the fall of 1846, construction finished for Immaculate Conception Catholic Church in Spinkhill, Derbyshire, England. The event merited a nearly 2,500 word, 4-column write-up in the Catholic Telegraph.

Spinkhill, almost exactly in the middle of England, is a not-insignificant region for students of English Catholic history. It was a Jesuit mission, and a hotbed of resistance during the country’s anti-Catholic attacks. Some of the land was owned by the Pole family (of the great Cardinal Reginald Pole), and one of the teachers at the nearby Mount St. Mary’s College was Gerard Manley Hopkins.

In attendance were at least two bishops: Nicholas Wiseman (later Cardinal), and Thomas Walsh. Wiseman, who was to fill Walsh’s episcopal sandals in a few short years, needs little introduction. Walsh lived a fascinating span of years, being jailed as a college student in 1793 during the French Revolution, witnessing Pope Pius VII’s restoration of the Jesuits in 1814 (a particularly important event for Spinkhill), and dying 1 year after the 1848 Revolutions.

Note that both Nicholas Wiseman and Thomas Walsh were serving as Vicars Apostolic in England. Bishop Thomas Walsh was the Vicar Apostolic of the Central District and was called the Titular Bishop of Cambysopolis. Bishop Nicholas Wiseman, the Titular Bishop of Milopotamus, was the coadjutor Vicar Apostolic of the Central District. That's why he succeeded Bishop Walsh. Eventually he would become the Cardinal Archbishop of Westminster with the restoration of the hierarchy in 1850.

Image credit: the entrance to the church. Used through a Creative Commons Attribution Share-alike license 2.0.
Posted by Stephanie A. Mann at 12:00 AM