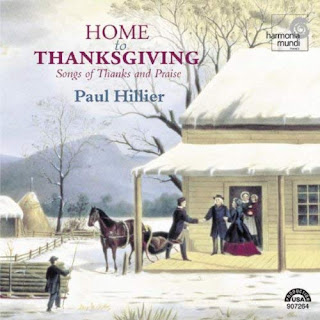 My late parents--especially my mother--often lamented that Thanksgiving was passed over so quickly in the Christmas rush. When I found this CD I bought them a copy and one for us as well, since it featured music for Thanksgiving!

The CD combines works from the British Colonies, Tudor England, and the Continent in the Middle Ages. Thus there are compositions by Thomas Tallis and Peter Abelard mixed among hymns from the American shape-note tradition and psalmody. The theme of all the hymns and songs is thanks and praise of Almighty God.

The image on the cardboard cover of the CD (no jewel box) is Currier & Ives' 1867 lithograph titled "Home to Thanksgiving." Please note that it's not "Home for Thanksgiving"! It's not so much an event to be celebrated as an activity to be observed.

This Thanksgiving would have been what my brother once called an "Annigiving", because it is also our late parents' wedding anniversary. 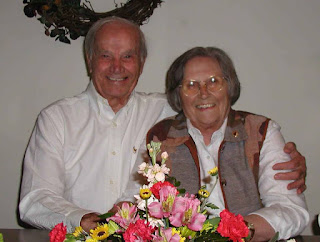 May they rest in peace and may we all be reunited at the heavenly banquet!

Happy Thanksgiving!
Posted by Stephanie A. Mann at 12:30 AM