Richard Topcliffe was born on November 14, 1531. He was the eldest son of Robert Topcliffe of Somerby, Lincolnshire, and his wife, Margaret, who was the the daughter of Thomas Burgh, 1st Baron Burgh of Gainsborough, former chamberlain of the household to queen Anne Boleyn. His parents died when he was 12 years old and he became the ward of Sir Anthony Neville who had married his aunt Anne, Margaret's sister.

Richard Topcliffe, was, of course, Queen Elizabeth's servant, with the duties of finding and torturing priests. The History of Parliament website provides some detail of his career, with definite hints of unpopularity: 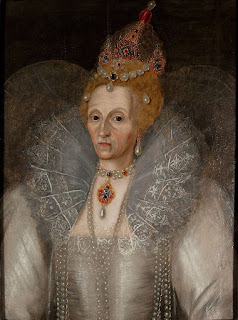 The time and manner of Topcliffe’s entry into public service are alike uncertain. The earliest reference to him as ‘her Majesty’s servant’ dates only from March 1573; but his own claim, made in June 1601, to have done 44 years’ service places its beginning much earlier, and indeed hints at a possible entry into Elizabeth’s retinue before her accession. . . .

Before the third and final session of this Parliament, in 1581, Topcliffe had begun his career as an interrogator of suspects. It is likely that he was drawn into this business both through his continuing interest in the northern rebels and by his attachment to the Earl of Shrewsbury, the custodian of Mary Stuart. It was at Shrewsbury’s instance that in 1578 Topcliffe helped to investigate the activities of some of the ex-rebels, and it was to the Earl that he reported on these and other matters. But it may well have been the anti-Catholic legislation of the parliamentary session of 1581 which determined that Catholic-hunting should become Topcliffe’s life-work. Although we know next to nothing of his part in that session (he was on one minor legal committee, 20 Feb.) his mounting activity in investigation from early in 1582 seems to reflect an accession of zeal as well as an expansion of opportunity. By the time the next Parliament met in the autumn of 1584 Topcliffe could be ranked with the notorious Richard Young as an acknowledged master of this ugly craft. . . .

The next 15 years of Topcliffe’s life were to make his name synonymous with the worst rigours of the Elizabethan struggle against Catholicism. It is clear that in much of what he did Topcliffe was acting under orders—whether under a commission such as that of March 1593 against Jesuits or under one of the numerous Council warrants to him to use torture—and that those who gave him these orders must share the odium of their consequences. Moreover, his superiors made only spasmodic efforts to restrain him. His brutal treatment of Southwell in 1592 cost him a spell in prison; in 1595, following the disclosure of Thomas Fitzherbert’s attempt to bribe him into doing two of the Fitzherberts to death, Topcliffe was again committed for a few weeks for maligning Privy Councillors; and early in 1596 he had to answer to the Council for his arbitrary behaviour towards prisoners in the Gatehouse. But every check was followed by a fresh outburst of activity, and only in his last few years did the moderating of official policy, and the failing of his own vigour, bring it to an end.

The gravamen of the indictment of Topcliffe is that he displayed an unmistakable and nauseating relish in the performance of his duties. On this the verdict of contemporaries is amply borne out by the evidence of his many letters and by the marginalia preserved in one of his books. It was, and is, easy to believe any evil of such a man; and to reflect that some of the worst accusations—among them that he reserved his most hideous tortures for infliction in his own house—rest upon fragile evidence is not to excuse him. Nor is there much profit in speculating on the influences which went to his making, although his early loss of both parents, the impact of rebellion upon his infant awareness, and perhaps some marital misfortunes might enter into the reckoning. . . .

Topcliffe’s domestic life was not without its difficulties. His marriage was clouded at least for a time by his alleged failure to pay his wife adequate maintenance. In his later years the criminal escapades of his eldest son, Charles, gave him much anxiety, and in January 1602 Sir Robert Cecil chided him for not having this wayward son ‘cleansed’. He also had the humiliation of seeing his nephew Edmund Topcliffe fall under suspicion on his return in May 1600 from a voyage abroad, during which he had assumed another name because of the ill-repute of his own.

Topcliffe had a house in Westminster from at least the end of 1571, when we know that it was burgled, clothes worth over £50 being stolen from the owner, besides other goods probably belonging to Topcliffe’s servants: the articles stolen from Topcliffe suggest that he maintained a good wardrobe. It was in this house, or an adjacent successor, that he was accused of torturing prisoners: but its nearness to the Gatehouse prison may have led to confusion between them.

Portrait of Elizabeth I around 1595 by Marcus Gheeraerts.

Among those we know Topcliffe tortured are St. Robert Southwell, St. Eustace White, and Blessed Thomas Pormort. He was present at the executions of St. Edmund Gennings, St. Polydore Plasden, and St. Swithun Wells on December 10, 1591. St. Swithun Wells hoped that Topcliffe would repent and convert: "I pray God make you a Paul of a Saul, of a bloody persecutor one of the Catholic Church's children."
Posted by Stephanie A. Mann at 12:30 AM