"Little Women" and the Holy Rosary 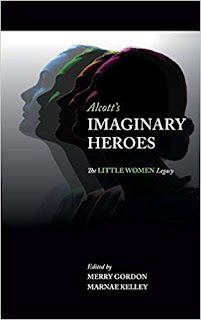 Earlier this year I submitted an essay for a collection of essays commemorating the 150th anniversary of the publication of Little Women (part one of what we know as Little Women which also includes Good Wives) by Louisa May Alcott.

The publisher, Pink Umbrella Books asked me to contributed some material for a blog post on their website:

What is your favorite scene from Little Women?

The opening scene is always fresh, no matter how many times I read it. Alcott sets the scene so beautifully and delineates the sisters’ characters so masterfully. While the narrator finally breaks in to explain the background to the story and does intrude to describe what Meg, Jo, Beth, and Amy look like, she lets their dialogue tell the story of who they are.

Who are some of your other “imaginary heroes” from literature?

Kirsten Lavransdatter in the trilogy by Sigrid Undset (The Bridal Wreath, The Wife, and The Cross): a very different coming-of age-story set in medieval Norway about a girl who marries the wrong man and must deal with the consequences;

Kate Alard in Sheila Kaye-Smith’s Superstition Corner, a historical novel set in the historical period I write about, the English Reformation under the Tudors;

Cordelia in Brideshead Revisited by Evelyn Waugh, the one member of the Flyte family who understands everyone and yet loves them, in spite of (or because of) their faults;

Jean Valjean in Victor Hugo’s Les Miserables: he is willing to sacrifice everything for justice and truth; he is always working to fulfill the faith that Bishop Myriel had in him.

My scribbling suit is often my pajamas since I start writing or researching in the morning. I like to think about what to write while I’m walking the dogs (two walks for dogs with very different paces), write out a few notes on paper about what I want to write about, material to use, and the goal of the piece—then I compose at the laptop.

The title of my essay is "Growing Up Catholic with Little Women: The Mystery of the Rosary". Here's a sample:

Like many other readers of Little Women, I nearly memorized the book when I was growing up. The memory of one passage has stayed with me through the years. It stunned me when I was growing up—growing up Catholic, attending Catholic schools, meditating on the mysteries of the Rosary, venerating the saints, going to Mass—living in a Catholic milieu (as I do today). . . .

Then I describe and excerpt the scene in which Amy discovers a set of Rosary beads--informed by Esther, Aunt March's Catholic French maid on its purpose and use--in her aunt's jewelry box.

This passage awakened my sense of Catholic identity.

Where the March girls read John Bunyan’s Pilgrim’s Progress, I read Thomas a Kempis’ Imitation of Christ; where the March family helped the poor Germans in their home town, I saved nickels for the Missions to help poor starving children in Africa. I knew of course that there are many differences between Protestants and Catholics in doctrine and practice. My father, who became a Catholic when I was in high school, was raised in a Protestant family, so I had aunts and uncles who attended either the Church of God or the Methodist church. Some of them were more anti-Catholic—that is, convinced we were going to Hell—than others, but familial bonds of love were essential and we all got along very well.

Nevertheless, Amy March—and Aunt March evidently since it was in her “Indian cabinet, full of queer drawers, little pigeonholes, and secret places”— thinking that a Rosary was a necklace shocked me. And why did Aunt March even have a Rosary? Did she buy it on a trip to Europe? Perhaps her husband bought it for her because it was beautiful and they had never thought of it as a religious object, a sacramental as Esther knew it was. . . .

Alcott's Imaginary Heroes: The Little Women Legacy is readily available from the publisher, on Amazon.com, and at Eighth Day Books (featured on my blog post at Pink Umbrella Books)! Other essays reflect on grief and mourning, each of sisters (Meg, Jo, Beth, and Amy) and their mother, Marmee.
Posted by Stephanie A. Mann at 12:30 AM