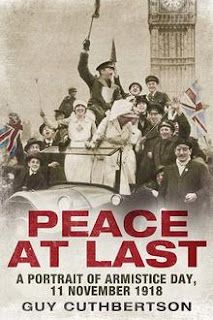 History Today posts this article about how the British celebrated on November 11, 1918, including in church services--and how church bells announced the victory and the peace:

In many different places, church bells were used to announce the news, although it wasn’t always possible to gather bell-ringers together before noon. At Malew on the Isle of Man, a variety of parishioners all lent a hand so that the bells were rung from 11am to 8pm. By noon, most towns and cities in Britain (The Daily Express referred to ‘Armisticities’) were a noisy mix of cheering, singing, bells and music. Crowds were huge and still growing, even though people had been advised to avoid large gatherings during the flu pandemic. And the situation was similar around the world. In Australia, where it was nighttime, the centres of Sydney, Melbourne and Adelaide were a mass of happy people.

In Kirkwall, the town crier proclaimed a half holiday at noon. Elsewhere, employers and mayors did the same. Schoolchildren, too, were given the afternoon off, and flooded out of school to join the crowds, singing and yelling and waving flags. The boys of Eton College were released at noon, and went down to the beflagged High Street with flags attached to their top hats. And in Shrewsbury, while church bells rang and a regimental band played, schoolboys formed a manic band of their own, bashing away at drums and vigorously blowing bugles. . . .

At the innumerable church services, the emphasis was on triumph and thanksgiving, rather than remembrance of the dead. God was on the side of Britain and her allies, and gave them victory. At a ceremony at St Matthew’s Church, High Brooms in Kent, the communion table was draped with a large union flag. Even the service at St Margaret’s Church, Westminster, the ‘parish church’ of parliament, was a happy affair. Following a brief but crowded parliamentary session where the terms of the armistice were read out and acclaimed with much cheering, the speaker adjourned the House of Commons at 3.17pm, and led the members to St Margaret’s. The Lords also attended the service, and the archbishop of Canterbury presided. Psalm 100 opened the simple service: “Make a joyful noise unto the Lord, all ye lands.” From outside came the sound of cheering and music.

While the service was taking place, King George V, Queen Mary and their daughter Princess Mary were journeying out into that cheering crowd (and the pouring rain). The fact that they were in an open carriage, with barely any police protection, showed that the king was not going to meet the fate of either the tsar or the kaiser. The royals shook many hands, and the patriotic crowd cheered them all along their journey.