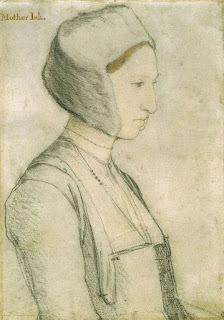 president of the College of Physicians, probably a native of Yorkshire, received his education at St. Paul's School, and at an early period made the acquaintance of Sir Thomas More, who took him into his family, made him tutor to his children, and treated him with a kindness almost paternal (Robinson, Registers of St. Paul's School, p. 19). Wood asserts that Clement had a part of his original education at Oxford, though at what house is unknown (Athenæ Oxon. ed. Bliss, i. 401). About 1519 he settled in Corpus Christi College on being constituted by Cardinal Wolsey his rhetoric reader in the university of Oxford, and subsequently he became reader of Greek. He studied medicine and was created M.D. On 1 Feb. 1527-8 he was admitted a member of the London College of Physicians (Munk, Coll. of Phys. ed. 1878, i. 26). On 16 April following he was admitted an 'elect,' and he was one of the physicians sent by Henry VIII to Wolsey when the cardinal lay languishing at Esher in 1529. He was 'consiliarius ' in 1529, 1530, 1531, and 1547, and in 1544 he was elected president of the College of Physicians. In the reign of Edward VI he retired to Louvain for religion's sake, as 'he always adhered scrupulously both to the doctrine and authority of the see of Rome' (Dodd, Church Hist. i. 202).

On 19 March 1553-4 he returned to England, and during Mary's reign practised his faculty in Essex. He was elected censor of the College of Physicians in 1555, and consiliarius in 1556, 1557, and 1558. Soon after Elizabeth's accession he again retired abroad, and practised his profession at Mechlin till his death, which occurred at his residence in the Blockstrate in St. John's parish on 1 July 1572 (Pus, De Anglice Scriptoribus, p. 767). He was buried the following day in the cathedral church of St. Rumbold, near his wife Margaret [see Clement, Margaret], who died on 6 July 1570. She had been educated with the children of Sir Thomas More, and had shared Clement's tuition with them.

Her tutor had made her little inferior to himself in the knowledge of Latin and Greek, and she assisted him in his translations.

He composed 'Epigrammatum et aliorum carminum liber,' and translated from Greek into Latin: 1. The Epistles of Gregory Nazianzen. 2. The Homilies of Nicephorus Calixtus concerning the Greek Saints. 3. The Epistles of Pope Celestine I to Cyril, Bishop of Alexandria (Tanner, Bill. Brit. p. 184).

He is sometimes identified as the man holding the scroll on the far right in the Rowland Lockey copy of Holbein's family portrait, which has been lost. 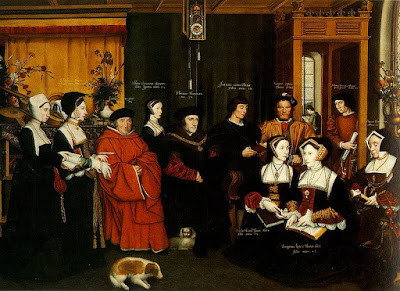 More about John Clement here. John and Margaret's daughter, Winifred, married William Rastell, who was the elder son of the printer, John Rastell (d. 1536) by his wife Elizabeth, sister of Sir Thomas More. Rastell published two volumes of More's works in 1557. Winifred died in 1553 and Rastell died in 1565 in Louvain.
Posted by Stephanie A. Mann at 12:30 AM