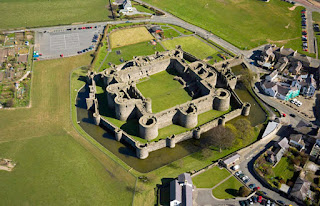 According to Dom Bede Camm in the Catholic Encyclopedia, William Davis, declared Blessed by Pope St. John Paul II, was

. . . one of the most illustrious of the priests who suffered under Queen Elizabeth, b. in North Wales, probably and Crois in Yris, Denbighshire, date uncertain; d. At Beaumaris, 27 July, 1593. He studied at Reims, where he arrived 6 April 1582 just in time to assist a the first Mass of the venerable martyr Nicholas Garlick. He received tonsure and minor orders 23 Sept., 1583, together with seventy-three other English students. Ordained priest in April, 1585, he laboured with wonderful zeal and success in Wales till March, 1591-2, when he was arrested at Holyhead with four students whom he was sending via Ireland to the English College at Valladolid. He was thrown into a loathsome dungeon in Beaumaris Castle and separated from his companions, having frankly confessed that he was a priest.

After a month his sanctity and patience gained him some relaxation of his close confinement and he was able to join the students for and hour in the day, and even to celebrate Mass. By degrees the jailor became so indulgent that they might have escaped had they so willed. The fame of the priest's sanctity and wisdom brought Catholics from all parts to consult him and Protestant ministers came to dispute with him. At the assizes he and his companions were condemned to death, on which the martyr intoned the "Te Deum", which the others took up. The injustice of the sentence was so apparent that to still the people's murmurs the judge reprieved the condemned till the queen's pleasure be known. Sent to Ludlow, to be examined by the Council of the Marches, Father Davies had to submit to fresh assaults by the ministers. Here too he foiled the artifices of his enemies who took him to the church under pretext of a disputation, and then began the Protestant service. He at once began to recite the Latin Vespers in a louder voice than the ministers', and afterwards publicly exposed the trick of which he had been a victim. From Ludlow he was sent to Bewdley, where he had to share a foul dungeon with felons, and from thence to other prisons until at last he was sent back to Beaumaris, where, to their mutual consolation, he rejoined his young companions. For some six moths he lived with them the life of a religious community, dividing the time between prayer and study, "with so much comfort to themselves that they seemed to be rather in heaven than in prison".

At the summer assizes it was decided that the priest must die as a traitor, though he was offered his life if he would go but once to church. In spite of the then open opposition of the people, who honoured him as a saint, the cruel sentence was carried out and he was hanged, drawn, and quartered at Beaumaris. As he put the rope round his neck, the martyr said: " Thy yoke, O Lord is sweet and Thy burden is light." His cassock stained with his blood was brought by his companions and preserved as a relic. They, though condemned to imprisonment for life, managed in time to escape, and the youngest found his way at last to Valladolid, where he recounted the whole story to Bishop Yepes, who wrote it in his "Historia particular de la Persecucion en Inglaterra". There is now a chapel in Anglesey built as a memorial to the martyr.

This parish in Wales provides more information on Father Davies' works and projects in the area he served:

He had many friends in this area, people who had known him since boyhood, but, of course, the very secrecy of his movements means that few records are available of the families he served. However, it is known that he was a friend of Robert Pugh of Penrhyn and that they were linked together in an interesting and important event on the Little Orme.

From May 1586 life became even more difficult for Catholics. The Queen was incensed to learn that laws against ‘recusants and obstinate persons in religion’ had not been enforced.

The local Magistrates were accused of negligence and ordered to condemn forthwith the unlawful assembly of Catholics. This was an order that could not be ignored, even by Magistrates sympathetic to Catholics, but a friendly warning was given to Robert Pugh and William Davies and they were able to escape, taking refuge, along with several others, in a cave on the Little Orme. They remained there in comparative safety for about nine months and even managed to produce a small book on a printing press they had hidden there.

The book was ‘Y Drych Gristianogawl’ – ‘The Christian Mirror’ and its importance lies in the fact that it was possibly the first book ever printed in Wales. In April 1587, the cave was discovered and the local Magistrate, Sir Thomas Mostyn, informed. He went to the cave with a large band of people but did not enter – preferring (so it was said) to wait until the following day. He left several of his own men on guard, but when morning came – it was found that all the cave dwellers had managed to escape!

Nothing more was known of Robert Pugh and William Davies until five years later, in March 1592, when they were arrested in Holyhead, Angelsey. They had gone there to assist four student Priests on their journey to Valladolid in Spain, but all six persons were arrested – Robert Pugh being the only one to escape. The others were thrown into Beaumaris Castle dungeons where Father Davies regularly said Mass. Beaumaris rapidly became a centre for all the Catholics of Angelsey.

This booklet provides more detail with pictures! Pope Benedict XVI received a facsimile of ‘Y Drych Gristianogawl’ when he visited the UK (He did not go to Wales, however).

Image credit: Beaumaris Castle (Licensed)
Posted by Stephanie A. Mann at 12:30 AM