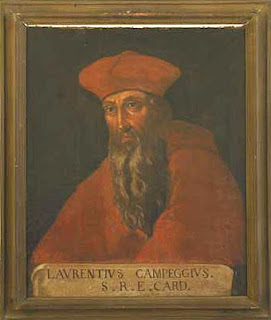 On July 25, 1539 Lorenzo Cardinal Campeggio, former bishop of Salisbury, former Cardinal Protector of England, and former Papal Legate in the matter of Henry VIII and Katherine of Aragon's marriage, died in Rome.

According to his Dictionary of National Biography entry, written by James Gairdner:

He was born in 1472 of a noble Bolognese family, and at nineteen years of age devoted himself to the study of imperial law at Pavia and Bologna, along with his own father, Giovanni Campeggio, whose works upon that subject were long held in considerable repute. Early in life he married, and had a son born in 1504, who was made a cardinal by Julius III in 1551. But after his wife's death he took holy orders, and became bishop of Feltri and auditor of the rota at Rome. He was sent by Leo X on a mission to the Emperor Maximilian, and while so engaged was created a cardinal, in his absence, in 1517. Next year he was sent to England as legate to incite Henry VIII to unite with other princes in a crusade against the Turks. He was detained some time at Calais before being allowed to cross, Henry VIII having insisted with the pope that his favourite, Cardinal Wolsey, should be invested with equal legatine functions before he landed. He was, however, very well received, and a few years later (1524) Henry VIII gave him, or allowed him to obtain by papal bull, the bishopric of Salisbury. About the same time he was made archbishop of Bologna. He held also at various times several other Italian bishoprics. He was also sent to Germany in 1524, and presided at the diet at Ratisbon, where a vain attempt was made to check the Lutheran movement. In 1527 he was besieged with Pope Clement VII at Rome, in the castle of St. Angelo. Next year he was sent into England on his most celebrated mission, in which Wolsey was again joined with him as legate, to hear the divorce suit of Henry VIII against Catherine of Arragon (sic). On this occasion he suffered much, both physically and mentally. He was severely afflicted with gout, and had to be carried about in a litter; and while he was pledged to the pope in private not to deliver judgment without referring the matter to Rome, he was pressed by Wolsey to proceed without delay. Some of his ciphered despatches from London at this time have been deciphered within the last few years, and show a very creditable determination on his part not to be made the instrument of injustice, whatever might be the cost to himself. The cause, as is well known, was revoked to Rome, and so his mission terminated. On leaving the kingdom he was treated with singular discourtesy by the officers of customs, who insisted on searching his baggage, and on his complaining to the king, it was clear that the insult was premeditated, and was really a petty-minded indication of the royal displeasure. Five years later, in 1534, he was deprived of the bishopric of Salisbury by act of parliament, on the ground that he was an alien and non-resident, though the king had certainly never expected him to keep residence when he gave him the bishopric.

Gairdner, who contributed many of the entries for the Tudor era in the DNB, clearly favors Campeggio's sincere and principled efforts in Henry VIII's marital issues. He believed that Henry and Katherine were validly married and thus he would not "be made the instrument of injustice, whatever might be the cost to himself". Gairdner seems to think poorly of Henry VIII's depriving Campeggio of the Salisbury bishopric and his orders for "the officers of customs" treating the Cardinal Legate with "singular discourtesy". God bless Cardinal Campeggio; may he rest in peace!
Posted by Stephanie A. Mann at 12:30 AM