The Month of Devotion to the Precious Blood 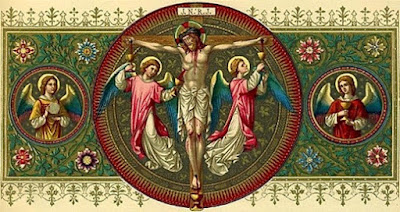 Although the Solemnity of the Precious Blood on July 1 was removed from the Church's calendar in 1969, the month of July is still traditionally dedicated to devotion to the Precious Blood of Jesus, by which we are saved. Devotion to the Precious Blood is obviously Eucharistic, because Catholics believe that we receive Jesus sacramentally in Holy Communion, Body, Blood, Soul, and Divinity. It also has connections to our devotion to the Sacred Heart of Jesus, since His heart was pierced by the soldier's lance on Calvary, and blood and water poured out. This devotion is rich and it's not just for Catholics: being washed in the Blood of Jesus is a common theme in traditional Protestant hymns.

Some of the Catholic hymns for the feast are ancient, like this one for Vespers:

Forth let the long procession stream,
And through the streets in order wend;
Let the bright waving line of torches gleam,
The solemn chant ascend.
While we, with tears and sighs profound,
That memorable Blood record,
Which, stretch’d on his hard Cross, from many a wound
The dying Jesus pour’d.
By the first Adam’s fatal sin
Came death upon the human race;
In this new Adam doth new life begin,
And everlasting grace.
For scarce the Father heard from Heaven
The cry of his expiring Son,
When in that cry our sins were all forgiven,
And boundless pardon won.
Henceforth, whoso in that dear Blood
Washeth, shall lose his every stain;
And in immortal roseate beauty rob’d,
An angel’s likeness gain.
Only, run thou with courage on
Straight to the goal set in the skies;
He, who assists thy course, will give thee soon
The everlasting prize.
Father supreme! vouchsafe that we,
For whom thine only Son was slain,
And whom thy Holy Ghost doth sanctify,
May heavenly joys attain.
So what is an Asclepiadic stanza? It's a stanza in a Greek poetic meter:

An Asclepiad (Latin: Asclepiadeus) is a line of poetry following a particular metrical pattern. The form is attributed to Asclepiades of Samos and is one of the Aeolic metres.

As with other Aeolic metrical lines, the asclepiad is built around a choriamb. The Asclepiad may be described as a glyconic that has been expanded with one (Lesser Asclepiad) or two (Greater Asclepiad) further choriambs. . . .

Asclepiads were used in Latin by Horace in thirty-four of his odes, as well as by Catullus in Poem 30, and Seneca. Examples in English verse include parts of Sir Philip Sidney's Arcadia ("Here wrong's name is unheard, slander a monster is; / Keep thy sprite from abuse, here no abuse doth haunt. / What man grafts in a tree dissimulation?") and W. H. Auden's "In Due Season" ("Springtime, Summer and Fall: days to behold a world").
Posted by Stephanie A. Mann at 12:30 AM