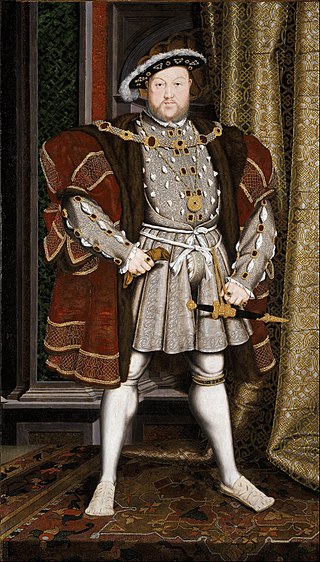 Advance notice: I'll be on the Son Rise Morning Show Tuesday morning about 7:50 Eastern time/6:50 Central to discuss Henry VIII's reaction to an abbot who didn't want to surrender his monastery peacefully. We'll base our conversation on this National Catholic Register post:

Even Fox News reported on the letter Henry VIII dictated in October 1536, demanding the most horrific punishment of an abbot of a small monastery in the northwest of England: he wanted him to be hanged, drawn, and quartered and the quarters displayed prominently as warnings to any who would oppose the will of Henry VIII. Then he changed his mind: the abbot should just be hanged. The secretary who took the king’s dictation crossed out the first punishment and then must have copied the letter and sent it.

The letter, on loan from the Victoria and Albert Museum in London, is on display at the Norton Priory Museum and Gardens in Cheshire. The museum, which opened in 2016, features “the most excavated monastic site in Europe. Boasting the ruins of an Abbey, 12th century undercroft and an 18th century Walled Garden, it is located within an oasis of tranquil woodland and wildflower meadows. The new museum displays thousands of artefacts (sic) from Norton’s 900 year history including the internationally significant 14th century statue of St Christopher.”

Norton Priory was a house of Augustinian Canons Regular, following the Rule of St. Augustine of Hippo, living in community and observing the evangelical counsels of obedience, chastity and common property. The Canons Regular first came to in England during the twelfth century and established many houses, more than the Benedictines. Because St. Augustine had written his Rule for a community of priests with active ministries, the Augustinian Canons Regular throughout England served the spiritual needs of their neighbors, developing close relationships with them.

What had the Abbot of St. Mary’s Priory in Norton done to make Henry VIII so vindictively angry?

Read the rest there and listen live here tomorrow morning!
Posted by Stephanie A. Mann at 12:30 AM