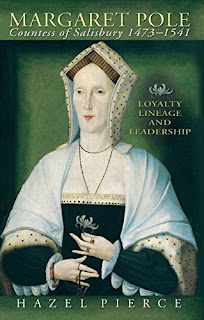 In the National Catholic Register last year, Thomas Craughwell wrote about the discovery of Blessed Margaret Pole's remains in the Tower of London:

You never know what you’ll find when you go hunting around old churches. In 1876, a restoration crew was at work in the Tower of London’s appropriately named Chapel of St. Peter ad Vincula (St. Peter in Chains). In the crypt, where so many executed prisoners were buried, they found the remains of a tall, elderly lady. And since only one elderly lady was executed in the Tower, its is very likely that these bones are the relics of Blessed Margaret Pole, whose feast day we celebrate on May 28.

Henry VIII is notorious for his cruelty to his wife and daughter, his execution his friends, most famously Thomas More, but Blessed Margaret is the only member of the English Royal Family to fall victim to the king.

Henry once described Margaret as “the saintliest woman in Christendom.” Bear in mind, the king offered this fine tribute years before he wanted Margaret’s head — literally.

Margaret Pole was a member of the House of Plantagenet, the family which had been ruling England since 1154. Two of her uncles were kings, Edward IV and Richard III. The famous “Little Princes in the Tower,” who went missing and were almost certainly murdered during the reign of their uncle Richard III, were her first cousins. You would think that coming from England’s royal family Margaret would have been guaranteed a life of privilege and ease. Instead, she suffered more than her share of tragedy.

She was executed in the aftermath of the Exeter Conspiracy, but mostly because one of her sons, Reginald Pole, had written to Henry VIII descrying not only his role as Supreme Head and Governor in the Church of England but his actions in executing the Carthusians, Sir Thomas More, and John Cardinal Fisher. After having been held in the Tower of London for two and a half years, she was Attainted as a traitor by Parliament and her execution ordered:

Early in the morning on May 27, 1541, Margaret learned that she would be executed that day. She had never had a trial. This was a summary execution ordered by the king.

Typically, large crowds turned out for the execution of a prominent person. But Henry’s advisors knew that having an elderly lady (Margaret was about 68 at the time) climb a scaffold in front of a throng of sympathetic witnesses would be a public relations disaster. Instead, in front of very few witnesses, Margaret was led out to a courtyard where a small headman’s block had been set on the ground. She knelt and placed her neck on the block. The Tower’s professional executioner was away, so a young novice was given the job. He blundered badly, hacking at Margaret’s neck and shoulders until she was dead.

The date of her martyrdom coincides with the feast of St. Augustine of Canterbury--but today we are celebrating Trinity Sunday. In the Diocese of Wichita, Kansas, ten first Masses are being celebrated by the newly ordained!
Posted by Stephanie A. Mann at 12:30 AM