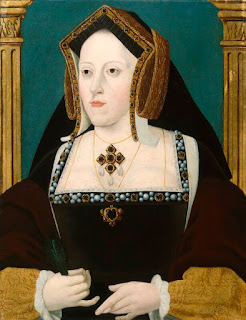 On May 10, 1533, Thomas Cranmer, the Archbishop of Canterbury, began the process of declaring that King Henry VIII and Catherine of Aragon had never been married. The Anne Boleyn Files blog describes the sequence of events:

On 5th April 1533, Convocation gave its ruling on Henry VIII’s marriage to Catherine of Aragon, stating that the Pope had no power to dispense in the case of a man marrying his brother’s widow, and that it was contrary to God’s law. This ruling led to Archbishop Thomas Cranmer being authorised to set up a trial to examine Henry VIII’s case for the annulment of his first marriage. This trial opened at a special court at Dunstable Priory in Bedfordshire.

Remember that the Catholic Clergy of England had renounced their spiritual loyalty to the Chair of St. Peter and the pope in 1532. Henry VIII was in control of the Convocation of Bishops.

Catherine of Aragon had been banished from Court and was residing in Hertfordshire in one of the late Thomas Cardinal Wolsey's houses, The Manor at the More. She would receive the news in July of 1533 that her new title was Princess Dowager since Henry and she were never married, according to the Archbishop of Canterbury. She refused to accept that title.

Dunstable Priory, a house of Augustinian Canons, would be suppressed in January of 1540. The last prior, Gervase Markham--who welcomed Cranmer on May 10, 1533--would surrender the property, accept his pension and become a secular priest. 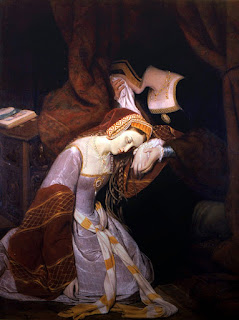 Three years after the opening of the Dunstable Court, another court met and decided the fate of Anne Boleyn. Giles Heron, son-in-law of the late Sir Thomas More, was the foreman of the Grand Jury of Middlesex meeting in Westminster Hall (where his father-in-law had been tried and sentenced to death). On behalf of the Grand Jury, Heron announced that there was sufficient evidence--presented by the injured party, Henry VIII--that Anne Boleyn, her brother George, the Court musician Mark Smeaton, and Henry's courtiers Sir Henry Norris, Sir Francis Weston and Sir William Brereton, had committed various crimes of adultery and treason against His Majesty and should be tried by jury.

Those trials would occur quickly and Anne Boleyn soon lost her title as Queen of England. Thomas Cranmer would declare that her marriage to Henry VIII had never taken place either. (Anne Boleyn had been in the Tower of London since May 2nd that year.)

For all his good service to Henry VIII, Giles Heron ended up accused of treason and executed in 1540.
Posted by Stephanie A. Mann at 12:30 AM