"A Protestant Understanding of England's Martyrs" 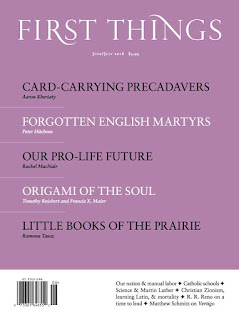 In the June/July 2018 issue of First Things (non-subscribers have access to three free articles a month), Peter Hitchens laments that Latimer and Ridley are Forgotten and provides A Protestant Understanding of England's Martyrs:

I offer these facts and thoughts to explain that this is the world in which I was brought up. I may even be the last living straggler of that era, a cultural coelacanth hauled up gasping from the silent, lightless depths of the day before yesterday. In my later, more multicultural life, I have learned that there are other versions of these events. I am more than ready to absorb these into my worldview, within reason. I know perfectly well that Elizabeth Tudor was not the simple figure of goodness and patriotism I was brought up to believe in. In general, I know that childhood history is merely a crude introduction to national myth, and that adults are required to treat it with severe and often brutal skepticism.

So please do not press William Cobbett’s view of the Reformation on me, or tell me to read the works of Eamon Duffy on the stripping of the altars, for I have done so. I know that there were terrible losses—of good men and women, of glorious art and sculpture, of valuable traditions, of learning and charitable works. I wish it had not been so. I only say that, without the Anglican compromise of Elizabeth, England would have had a far more savage Reformation than it did, and would have lost much more, as I think events in Scotland clearly show to this day.

Only one issue really concerns me here, on which I will stand my ground. And that is the argument, often advanced by Roman Catholics to me, that Elizabeth persecuted their faith just as Mary persecuted mine. It is not true to say that Elizabeth and Mary were mirror images of each other, and it matters that it is not true.

He is particularly upset at the honor Catholics pay to Saints John Fisher and Thomas More as depicted in one painting of the Brompton Oratory:

. . . More and Fisher, like Latimer, Ridley, and Cranmer, were undeniably great and courageous Englishmen, and eloquent ones, too. One especially potent use of their memory can be found in St Wilfrid’s Chapel in the Brompton Oratory in London, perhaps the supreme headquarters of Catholic militancy in England. Above the altar of the English martyrs, in a side chapel of this majestic church, is a powerfully sinister and suggestively grim mural. It looks very old, but it was painted in 1938 by Rex Whistler (who is possibly the model for Charles Ryder in Evelyn Waugh’s Brideshead Revisited). It depicts executions at Tyburn, London’s principal place for such things, and is flanked by idealized portraits of More and Fisher.

The execution scene is a masterpiece. The callous, lumpish crowd, backs turned on us, watches as several bodies dangle from a triangular gibbet. Many people are busy with horrible tasks. A condemned man is being guided up a ladder to join these broken, throttled corpses, and every inch of him betokens horror and resignation. Another man is being unstrapped from a hurdle before he too makes the ascent. A fire burns in the middle distance, oily black smoke curling into the summer sky (the trees are in leaf). That fire, it is clear, means no good to somebody. It seems to be dusk, but the darkness of the scene might only be the mood, or the smoke. Halberds and pikes, immensely tall, rise from among the mob, almost as high as the gallows, marking the presence of soldiers, presumably gathered around some notable victim. A castle tower commands the background. Far off, a windmill stands in a sort of Claude Lorrain landscape of sylvan peace. Yet the light in the painting is the light of a nightmare. A strong impression of evil and cruelty comes out of the frame, as I am sure it is meant to do. I would not want an impressionable child to see it. It is one of the most powerful pieces of propaganda I have ever experienced. When I recently revisited it, I was astonished to find how small it actually is. I had remembered it as huge. . . .

He contends that this painting is misleading since More and Fisher were beheaded, missing the point that the Catholic protomartyrs, the Carthusians St John Houghton, St Robert Lawrence, St Augustine Webster, the Briggitine St Richard Reynolds, and the parish priest Blessed John Haile were hanged, drawn, and quartered! He thinks that because More and Fisher are on the left and right hand panels, the center panel is supposed to represent their martyrdoms.

Hitchens confuses doctrine and discipline (the laity receiving the Body and Blood of Holy Communion separately; married priesthood through the Anglican Ordinariate, and singing hymns), and doesn't think it fair that we don't honor Cranmer (or Latimer, or Ridley I suppose) on the Roman Calendar of Saints, while the Church of England honors More, Fisher, and the Catholic martyrs of the Recusant era on its Calendar of Saints.

The Catholic laity have always received the Body and the Blood at Holy Communion; the Host is not exsanguinated flesh! He conveniently passes over the point of what Catholics are receiving--the Real Presence, Body, Blood, Soul and Divinity, of Jesus Christ under the form of Bread and Wine--and what Anglicans are receiving according to the 39 Articles of the Church of England. He doesn't understand what the Mass and Holy Communion are to a believing, devout Catholic. That's also why he thinks the Anglican Book of Common Prayer services should do quite well for Catholics today and should have done quite well for Elizabethan Catholics when Parliament passed laws forbidding the celebration of the Holy Mass as Catholics knew it at the beginning of Elizabeth's reign.

There have always been married Catholic priests, in the Eastern Rite--his view of the Catholic Church is too small and insular.

Singing hymns? That's a great sign of change in the Catholic Church? That started in the nineteenth century in England with the Oratorians when Catholics were at last allowed to practice their faith and worship God in the Holy Sacrifice of the Mass!

The Church of England and the Catholic Church have completely different understandings of what it means to be named to their respective Calendar of Saints. Hitchens ought to know that.

He is piling on and mixing things up, and he displays as much misunderstanding as he does anguish--and thus he weakens what he wanted to argue in his thesis, that "It is not true to say that Elizabeth and Mary were mirror images of each other, and it matters that it is not true."

Please read the rest there. I'll be thinking more about that contention, apart from the misunderstandings that Hitchens has added to his article, muddling his central thesis.
Posted by Stephanie A. Mann at 12:30 AM