The Tudors Arrive in Paris 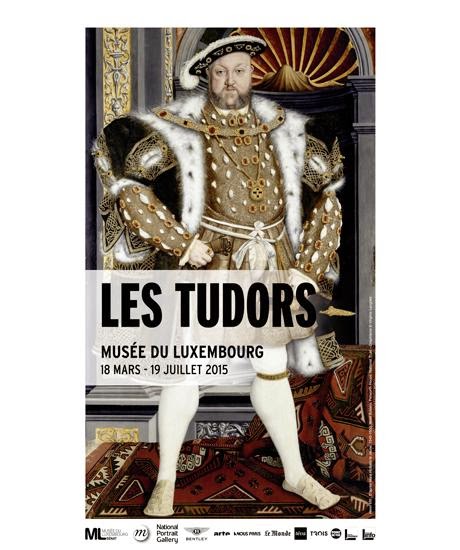 The Tudors--their portraits, more precisely--are on exhibition at the Musee du Luxembourg in Paris. From Time Out magazine:

Family drama, throne politics, religious quarrels, beheadings and sumptuous clothing ensured that the Tudor dynasty was anything but dull. This exhibition by the Réunion des Musées Nationaux in partnership with the National Portrait Gallery looks beyond stiff-backed royal portraits to explore how the fact and fiction of the dynasty have merged in our collective cultural consciousness – so compelling are tales of Henry VIII, his six unfortunate wives, Bloody Mary and The Virgin Queen that the Tudor dynasty has been a rich source of drama for writers and directors ever since.

There's an impressive collection of Renaissance portraits by Nicholas Hilliard, Joos van Cleve, Hans Holbein and more, set alongside film and book extracts that emphasise the dynasty’s legendary status through the ages. Everyone from Shakespeare to Gioacchino Rossini and Shekhar Kapur seems to have tried their hand at fictionalising the family dramas, and the Tudors captured the French imagination too, in the writings of Victor Hugo and Alexandre Dumas and paintings by Paul Delaroche. This is the first exhibition about the dynasty in France, and it highlights a mutual fascination and power play between French and English royals: from the friendly rivalry between Francois I and Henry VIII to Elizabeth I’s cordial relationship with Catherine de Médicis as the two countries’ foreign policies drew closer and closer together.

The National Portrait Gallery in London has this input into the development of the exhibition:

In 1523 Henry VIII’s troops, lead by Charles Brandon, Duke of Suffolk, made a bold - but ultimately unsuccessful - move to take Paris and reclaim the French throne for the English king. Nearly five hundred years later, Henry VIII is finally making it to Paris.

In partnership with the Réunion des Musées Nationaux, the Gallery is co-presenting an exhibition on the Tudor dynasty at the Musée du Luxembourg. This exciting collaboration extends the research undertaken for ‘The Real Tudors’ to consider Anglo-French relations and artistic exchange in the sixteenth century. The scale of the exhibition has also offered the opportunity to incorporate a number of important international loans and to look beyond portraiture to the broader material culture of the English renaissance.

When developing this exhibition with Tarnya Cooper and Cécile Maisonneuve, it became evident that presenting the Tudors in Paris meant that the dynasty could also be considered in a very different context to that provided by the National Portrait Gallery – that of ‘La République française’. For the Tudors have a French ‘history’ too, created by the writers, artists and composers of the nineteenth century, such as Victor Hugo, Eugène Devéria and Camille Saint-Saëns. This has allowed us to consider the notion of ‘The Real Tudors’ from an entirely different standpoint – Une dynastie. Une légende.

The timing is also perfect, for 2015 marks the 500th anniversary of the accession of François Ier. Henry’s greatest rival will be celebrated in an exhibition at the Bibliothèque nationale de France and in terms of cultural competition their presentation in Paris will perhaps capture something of the magnificence of their meeting in 1520 at the Field of the Cloth of Gold.

Information about the BNF's exhibition mentioned above may be found here. It's at the huge newer library on the Seine, named for Francois-Mitterand.
Posted by Stephanie A. Mann at 12:30 AM