The Real Saint Thomas More on Saturday, May 2nd 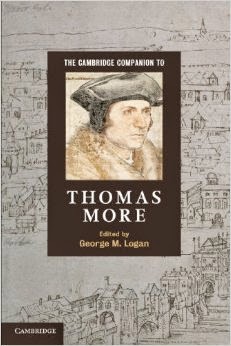 The latest episode of Wolf Hall was the best one so far with its focus on Cromwell's efforts to suppress dissension from Henry VIII's new role as Supreme Head and Governor of the Church of England and the breakaway from the Catholic Church. Watching this episode was homework for my presentation this Saturday at the Spiritual Life Center on The Real Saint Thomas More from 9:30 to 11:00 a.m. this Saturday (May 2). If you're in the Wichita area, register here or call 316-744-0167.

While this was the best of the episodes so far, it also contained some historical inaccuracies, as Nancy Bilyeau notes in her review for Medievalists.net:

A tough and wily Cromwell questions Barton, who comes across as vindictive and unbalanced, and then interviews each of the important people who've been conspiring with the nun. Not one of them comes within a country mile of Cromwell’s abilities and intelligence. The true motive of the last remaining Plantagenets’ unhappiness with Henry VIII during this period is not explored in Wolf Hall—their respect and affection for Henry’s first wife, Catherine of Aragon; their (justifiable) fear for what will happen to her daughter Mary; and their fear of the country’s religious future in this fast-moving Reformation. Instead, the Poles and Courtenays and Bishop Fisher, one of the most respected scholars in all of Europe in the early 16th century, are shown as stupid, easily duped, and ungrateful for Henry VIII’s supposed years of kindness.

Wolf Hall strains to connect the followers of Sister Elizabeth Barton to an international conspiracy bent on destroying England and taking orders from Rome. At one point, Cromwell tells Margaret Pole, the niece of Edward IV, that through his spies in the kitchen he knows that her sons, Henry and Geoffrey Pole, had dinner with the Lady Mary twice and “talked about the Emperor, the invasion, and the best way to bring it about.” The Emperor Charles V was Mary Tudor’s first cousin through her Mother, and according to Wolf Hall, England was terrified of Spanish invasion in the mid-1530s.

There are two problems with this scene. One is that as Anne Boleyn made clear at the beginning of the episode, Lady Mary is a virtual prisoner in the household of her half-sister Princess Elizabeth. She was in reality subjected to emotional and even physical abuse during this time and watched like a hawk for receiving any letters from sympathizers. The possibility that she could escape her jailers to have dinner with her Yorkist relations and drink toasts to Spanish invasion is nothing short of ludicrous. Second, if such dinners had taken place it would fit the definition of treason to a “T.” All parties would have been carted to the Tower of London immediately. Several years later, when a religious rebellion in the North of England left Henry VIII even more paranoid, Cromwell would orchestrate the destruction of Henry Pole and Edward Courtenay on evidence much flimsier than the content of these alleged dinners. But the deaths of those found guilty in the “Exeter Conspiracy” lies years ahead of this episode, between Wife No. 3 and Wife No. 4.

[Note that Bilyeau includes a magnificent sequence on the parties involved in the "Exeter Conspiracy" in her second Joanna Stafford novel, The Chalice.]

Anne tells Cromwell she wants him to “make” More talk, to say why he won’t sign the oath. When Cromwell replies, “No, Madam, we don’t do that,” she runs from the room.

This is one of the most dishonest moments of Wolf Hall. It is no secret that the real Thomas Cromwell, during this same period, presided over the arrest, questioning and executions of a group of friars and monks who also refused to sign the oath. The Carthusian monks of the Charterhouse were starved, hanged, cut down while still alive, castrated and dismembered. This is one of the most well known aspects of England under Thomas Cromwell: the swift arrests, the torture, the convictions without trial, the harrowing executions. No matter how many kittens that Wolf Hall’s Cromwell cuddles or women he flirts with, the historical record is inescapable. Yet at one point in this series, a fair and tolerant Cromwell tells More to “repent your cruelties.”

Bilyeau is referring to Blesseds Humphrey Middlemore, William Exmew and Sebastian Newdigate, who were executed on June 19, 1535, after being arrested on May 25 and kept bound to pillars with iron rings around their necks, hands, and feet, without any relief for 14 days before trial--the rest of the Carthusians who refused to support Henry VIII's supremacy were imprisoned and left to starve to death without even an attainder. The Observant Franciscans were similarly treated.

Mantel and the BBC deceive viewers when they present such a merciful Cromwell in contrast with such a vindictive More.

Richard Rex analyses the controversy about Thomas More's prosecution of heretics and the rather rough language he used in his apologetics in The Cambridge Companion to Thomas More:

Thomas More’s dealings with heresy and heretics have been the most bitterly contested aspects of his career. Even within his lifetime they aroused controversy, as his own Apology demonstrates. John Foxe’s famous ‘Book of Martyrs’ cast More, along with the Tudor bishops, among the deepest-dyed villains, and the stories it told, true and false alike, have been handed down and continue to be supplemented and embellished to this day. Thus Brian Moynahan has bizarrely proposed that More, from his confinement in the Tower of London, masterminded the taking of William Tyndale in Antwerp; while the numbers of heretics executed during More’s chancellorship were recently inflated from half a dozen to ‘a few hundred’ by one of England’s leading journalists; and in 2009 a novelist won the Man Booker Prize for Fiction (appropriately enough) with a story in which she has More admit in conversation the allegations of torture he denied in print. Which all goes to show that, while there have always been admirers for whom Thomas More was a ‘man for all seasons’, there have always been critics for whom he was a fanatical persecutor.

More’s Tudor critics mostly censured him not for persecution as such but for persecuting the wrong people, namely Protestants. Today’s critics censure him rather for the fact of the persecution, and for his emotional intensity in going about it, than for his particular choice of victims. The contrast that mattered for John Foxe was between papist and Protestant; the contrast that matters more today is between the apostle of tolerance some detect in the author of Utopia and the inquisitorial magistrate who became Henry VIII’s lord chancellor.
Posted by Stephanie A. Mann at 12:30 AM