Judging a Book by Its Cover 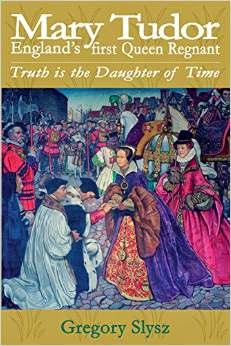 New from Gracewing Publishers, this study of Mary I, England's first Queen Regnant, written per the publisher on a popular level:

Although several books on Queen Mary have been published in recent years, they are overly academic in nature. This volume seeks to introduce a more general audience to Mary and her reign as well as offer a pathway to weightier tomes on the subject through three interconnected parts. The first is a historiography which outlines the reasons for the vilification of Mary and her administration, the second is a biography that traces Mary’s life from her birth to her becoming queen and the third is a reappraisal of the key controversies of her reign. It seeks to demonstrate both that Mary’s sobriquet “bloody” is undeserved and that her reign was considerably more successful than its detractors have claimed. This book not only reassesses the state of late Mediaeval and early Tudor religion but examines several aspects of Mary’s reign, including Mary as politician, her personal faith, the role of Cardinal Pole in policy-making and the challenges of the Catholic Restoration.

The book also posits that the critical reaction to Mary’s reign helped to define the nature of the English/British nation-state as well as contribute to Britain’s national “ideology” and self-understanding for five hundred years.

Dr Gregory Slysz has a PH.D in History and Politics from the University of Kent and has taught at both university and high school. Currently Head of History at DLD Independent College in London, he has written and lectured extensively on both current affairs and his research interests in history.

It is certainly a gorgeous cover, with the rich colors and vivid illustration of Mary I's triumphant entry into London after the Duke of Northumberland's attempted coup was defeated.
Posted by Stephanie A. Mann at 12:30 AM