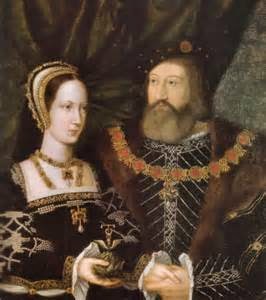 Nancy Bilyeau writes about the most romantic of all Tudor marriages, between Henry VIII's beautiful sister the Princess Mary and Charles Brandon, for the English Historical Fiction Authors blog:

Erasmus said of Mary Tudor, "nature never formed anything more beautiful." The pampered and adored younger sister of Henry VIII was married at 19 to Louis XII, king of France. After the princess arrived in Paris with her dowry of 400,000 crowns and hundreds of attendants, the French, disposed to find her a disappointment, admitted that she was, indeed, a "nymph from heaven."

King Louis, 52, crippled with gout, died less than three months after the wedding but not before showering his teenage wife with jewels, including "the Mirror of Naples," a diamond pendant with a pearl "the size of a pigeon's egg." Everyone expected the widow of the French king to make another spectacular royal marriage.

Instead, while still in France, she secretly took as her second husband a 31-year-old Englishman, Charles Brandon, the newly elevated Duke of Suffolk, celebrated for his good looks, military valor and jousting skill. Before she sailed for France, Mary had told her brother she would only agree to wed the old French king if she could choose her second husband herself. Desperate for the diplomatic alliance, Henry VIII had agreed. But Mary feared that if she returned to England, her brother would force her into another arranged marriage. She persuaded Brandon, whom she had known for years and had probably fallen in love with in England before her marriage, to marry her. They had no permission to do so and were in disgrace, with Brandon facing arrest, until Henry VIII forgave them. Charles Brandon was, after all, his best friend.

It was a highly romantic episode, inspiring a stream of novels over the centuries, most significantly When Knighthood Was in Flower in 1898, which sold so many copies it inspired a burst of similar historical novels and no less than three films, including one in 1922 financed by William Randolph Hearst and starring Hearst's mistress, Marion Davies.

While this might be a most romantic story, Bilyeau focuses on how Charles Brandon used marriage to advance his career and build his wealth. In most Tudor histories I've read, it's clear that the Princess Mary was always opposed to Henry VIII's attempts to have his marriage to Queen Katherine of Aragon annulled and to his attacks on the Catholic Church hierarchy in England. Charles Brandon seems to have served and supported Henry VIII in these endeavors and decisions completely--so as Bilyeau concludes her post, the real question is:

Did Mary Tudor find happiness with the husband she chose for herself, who she risked her brother's wrath to marry? Was this a man who, despite his irresistible good looks and athletic prowess, could be a good husband, even in the 16th century? Perhaps. That is another question entirely, fit for another blog post.

Of course, Mary, the former Queen of France, died before the break, in 1533. She was buried first in the great abbey church of Bury St. Edmonds and then her remains were re-interred after the abbey was suppressed in 1539 in one of the abbey's parish churches, St. Mary's. And Charles Brandon married again after she died (Catherine Willoughby was his last wife).
Posted by Stephanie A. Mann at 12:30 AM