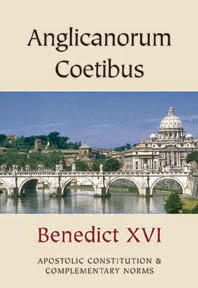 According to the Friends of the Ordinariate website, they've received a letter from Emeritus Pope Benedict XVI in response to a thank you letter they had written him:

The Chairman had written to Benedict XVI to express his gratitude for the gift of the Ordinariate. He had also sent the Pope Emeritus a brief history – translated into German – of the Ordinariate’s central church, Our Lady of the Assumption and St Gregory’s, Warwick Street (London, W1). This church is built on the site of a Bavarian embassy chapel, which was pillaged during the anti-Catholic Gordon Riots (1780).

In his letter, His Holiness asked Nicolas Ollivant to “convey my thanks to all [the Ordinariate’s] members”, before saying that he is “particularly glad that the former Bavarian Chapel has now become … [the] Ordinariate’s church, and serves such an important role in the whole Church of God.”

The site offers a translation of the letter, since it was written in German as was part of the message the Friends had sent Pope Benedict, and an image of the letter.
Posted by Stephanie A. Mann at 12:30 AM