Fasting on Halloween? No Candy? 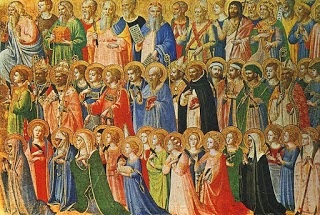 What a scary thought!  Halloween as we know it now is a night for gathering candy and sweets, dressing up in ghoulish costumes, and watching horror movies! Since today is Halloween and also Friday, we should either abstain from meat or complete some other penance. We should fast before we feast.

November 1 and November 2 were important days on the Church calendar for all Christians before the Reformation. They fasted on October 31, the vigil of the feast of all the saints in heaven. "Halloween" means the evening before All Hallows--All Saints.  All Hallows/All Saints was a Holyday of obligation then as it is today, meaning that Catholics were to attend Mass. Thus the term "Hallowmas" like Christmas, Michaelmas, etc.

As important as All Saints Day was because of the devotion of the people to their patron saints, All Souls Day was also important because it was the day set aside for praying for the dead who were not yet in Heaven. The Poor Souls in Purgatory were still undergoing their purification because of their attraction to sin during their time on earth. Their final destination was Heaven, but they were suffering in Purgatory--so their family on earth prayed for them, hastening their Heavenly happiness.

Sadly, because of the Reformation, which in addition to tearing Christians in this world apart, the great unity of Christians on earth, in heave,n and in purgatory was torn apart--add to that the commercialization of Halloween with horror movies and parties and costumes--and we Catholics don't know what Halloween is any more and how to celebrate it.

Scott Richert writes about the concerns some Catholics and Christians have about celebrating Halloween because of its "pagan origins", explaining:

Despite concerns among some Catholics and other Christians in recent years about the "pagan origins" of Halloween, there really are none. The first attempts to show some connection between the vigil of All Saints and the Celtic harvest festival of Samhain came over a thousand years after All Saints Day became a universal feast, and there's no evidence whatsoever that Gregory III or Gregory IV was even aware of Samhain.

In Celtic peasant culture, however, elements of the harvest festival survived, even among Christians, just as the Christmas tree owes its origins to pre-Christian Germanic traditions without being a pagan ritual.

And then he explains more about the development of the celebration of Halloween and opposition to it, focusing on England before and after the Reformation:

Combining the Celtic and the Christian

The Celtic elements included lighting bonfires, carving turnips (and, in America, pumpkins), and going from house to house, collecting treats, as carolers do at Christmas. But the "occult" aspects of Halloween—ghosts and demons—actually have their roots in Catholic belief. Christians believed that, at certain times of the year (Christmas is another), the veil separating earth from Purgatory, Heaven, and even Hell becomes more thin, and the souls in Purgatory (ghosts) and demons can be more readily seen. Thus the tradition of Halloween costumes owes as much, if not more, to Christian belief as to Celtic tradition.

The (First) Anti-Catholic Attack on Halloween

The current attacks on Halloween aren't the first. In post-Reformation England, All Saints Day and its vigil were suppressed, and the Celtic peasant customs associated with Halloween were outlawed. Christmas and the traditions surrounding it were similarly attacked, and the Puritan Parliament banned Christmas outright in 1647. In the Northeastern United States, Puritans outlawed the celebration of both Christmas and Halloween, which were revived largely by German Catholic (in the case of Christmas) and Irish Catholic (in the case of Halloween) immigrants in the 19th century.

He gives good advice about balancing the pros and cons of trick or treating, but it's clear that the true way to celebrate Halloween is to remember and apply Blessed John Henry Newman's warning: "Life is short. death is certain, and the world to come everlasting" on Halloween and every other day.
Posted by Stephanie A. Mann at 12:30 AM