Newman the Prophet on the Doctrine of Religious Liberalism 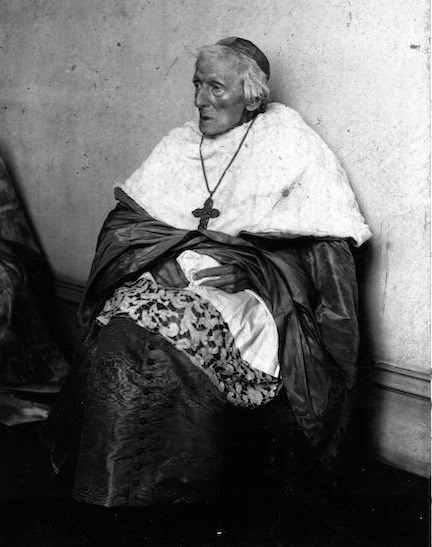 At the culmination of my Newman series last week at the Spiritual Life Center in Wichita, I presented some passages of Blessed John Henry Newman's "Biglietto Speech", made when he received the letter from Pope Leo XIII announcing his appointment as Cardinal Deacon.

We noted that many people reading this today would say the situation Newman describes is just as it should be: religion should not be the bond of society; Christianity should not influence the "goodly framework of society", there is no one true religion; religion should be just a private luxury; a secular, government-controlled education is better for forming a well-ordered and respectable population, etc. We even agreed that many Catholics would say that what Newman describes is an acceptable situation:

And, I rejoice to say, to one great mischief I have from the first opposed myself. For thirty, forty, fifty years I have resisted to the best of my powers the spirit of liberalism in religion. Never did Holy Church need champions against it more sorely than now, when, alas! it is an error overspreading, as a snare, the whole earth; and on this great occasion, when it is natural for one who is in my place to look out upon the world, and upon Holy Church as it is, and upon her future, it will not, I hope, be considered out of place, if I renew the protest against it which I have made so often.

Liberalism in religion is the doctrine that there is no positive truth in religion, but that one creed is as good as another, and this is the teaching which is gaining substance and force daily. It is inconsistent with any recognition of any religion, as true. It teaches that all are to be tolerated, for all are matters of opinion. Revealed religion is not a truth, but a sentiment and a taste; not an objective fact, not miraculous; and it is the right of each individual to make it say just what strikes his fancy. Devotion is not necessarily founded on faith. Men may go to Protestant Churches and to Catholic, may get good from both and belong to neither. They may fraternise together in spiritual thoughts and feelings, without having any views at all of doctrine in common, or seeing the need of them. Since, then, religion is so personal a peculiarity and so private a possession, we must of necessity ignore it in the intercourse of man with man. If a man puts on a new religion every morning, what is that to you? It is as impertinent to think about a man's religion as about his sources of income or his management of his family. Religion is in no sense the bond of society.

Hitherto the civil Power has been Christian. Even in countries separated from the Church, as in my own, the dictum was in force, when I was young, that: "Christianity was the law of the land". Now, everywhere that goodly framework of society, which is the creation of Christianity, is throwing off Christianity. The dictum to which I have referred, with a hundred others which followed upon it, is gone, or is going everywhere; and, by the end of the century, unless the Almighty interferes, it will be forgotten. Hitherto, it has been considered that religion alone, with its supernatural sanctions, was strong enough to secure submission of the masses of our population to law and order; now the Philosophers and Politicians are bent on satisfying this problem without the aid of Christianity. Instead of the Church's authority and teaching, they would substitute first of all a universal and a thoroughly secular education, calculated to bring home to every individual that to be orderly, industrious, and sober, is his personal interest. Then, for great working principles to take the place of religion, for the use of the masses thus carefully educated, it provides — the broad fundamental ethical truths, of justice, benevolence, veracity, and the like; proved experience; and those natural laws which exist and act spontaneously in society, and in social matters, whether physical or psychological; for instance, in government, trade, finance, sanitary experiments, and the intercourse of nations. As to Religion, it is a private luxury, which a man may have if he will; but which of course he must pay for, and which he must not obtrude upon others, or indulge in to their annoyance.

Another challenge of these paragraphs is to read them as positive, not negative, statements--to find the truth, reverse the errors that Newman outlines:

There is one true religion; one creed is true and the others are not; God has revealed His truth and He has founded a Church to teach it; it is miraculous and real; those who follow it base their devotions, their worship and prayer, upon its doctrines and teachings, etc. One who follows the true religion will act in public matters based upon its doctrine (including morality). It does matter what religion a man follows. The true religion should be the bond of society; it should inform the common good and influence education, commerce, diplomacy, etc.

When we turned Newman's definition of the spirit of liberalism around, we recognized how even professing Catholics, influenced by our culture's emphasis on toleration and acceptance, can feel uncomfortable with these positive statements about the truth of Christianity and the fullness of that truth in the Catholic Church. As Newman says later in the speech, "There never was a device [the spirit of liberalism in religion] of the Enemy so cleverly framed and with such promise of success." For note, as Newman began the discussion, that "Liberalism in religion is the doctrine"--it is a teaching that establishes truths that make claims as clear as those in the paragraph immediately above. This religious liberalism has in some ways become the divisive bond of society and it attempts to influence not just the public, but the private practice of religion by individuals--note the attempt of the city of Houston to subpoena the sermons of ministers opposed to a city ordinance. Usually the claim of those urging a secular society is that religion, a private affair, should be practiced within the walls of one's church, but now it's reaching inside those walls--a definite chilling affect on free speech and exercise of religion, as obtrusive and annoying as it condemns religion for being.
Posted by Stephanie A. Mann at 1:00 AM