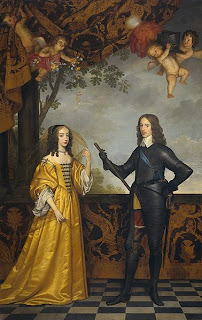 Their son would marry another royal princess, also named Mary (James, the Duke of York's daughter) and William and Mary would reign together as King and Queen of England after the Glorious Revolution, until Mary's death in 1694--of smallpox.

William III died of not smallpox but pneumonia in 1702.
Posted by Stephanie A. Mann at 1:08 AM