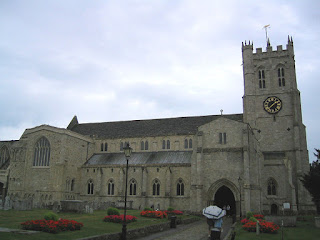 As the Dissolution of the Monasteries is still on my mind (because of the article I wrote for the November/December issue of OSV's The Catholic Answer Magazine, an interview on the Son Rise Morning Show on November 10, the interview I have scheduled on November 15 with Al Kresta, and a Serra Club presentation that evening), today's Sunday Shrine post is about Christchurch Priory in Dorset. The priory church was part of the Augustinian monastery dissolved in 1539. The priory church was set for destruction, but the former prior, John Draper (who had surrendered the monastery and received a generous pension) supported the townspeoples' request that the church become the parish church. Henry VIII granted that request in 1540.

There is a miracle associated with the building of the priory church: the Miraculous Beam--

In the first half of the 12th century lies the origin of the legend of the Miraculous Beam.

It is said that in the early building operations, a mysterious carpenter assisted the work. One evening a wooden beam was found to be too short, but the next morning the workmen found to their amazement that it had grown to the proper length overnight and had already been placed in the correct position. The mysterious carpenter did not appear after this and it was assumed by all that he must have been Jesus Christ who helped to build his own church, which thus became known as Christ's Church of Twynham, as the town was then called. Later the town became Twynham-Christchurch, later Christchurch.

That story reminds me of the Loretto Chapel in Santa Fe, New Mexico, with its mysterious carpenter and extraordinary staircase. Sadly, the Loretto Chapel has been deconsecrated and is a privately owned museum and event location (for weddings). Franciscans were still there and it was an active chapel when I visited with my parents many years ago (today was my father's birthday--he would be 90 years old--may he rest eternally young in the peace and glory of Christ!) and I still have a postcard depicting one of the friars. Christchurch Priory is an active Anglican parish church; the wikipedia entry says it is Broadchurch in churchmanship.
Posted by Stephanie A. Mann at 1:12 AM