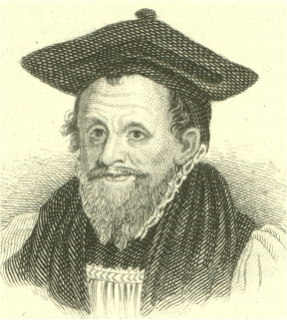 Richard Bancroft was the Archbishop of Canterbury from 1604 to 1610, when he died. He was also Chancellor of Oxford from 1608 until his death. He succeeded John Whitgift in the Canterbury office and he pleased King James I and VI very much in his opposition to Puritanism. He also supervised the Authorized Translation of the Holy Bible into English.

Bancroft pursued a policy of toleration to some Catholics, believing that if they were loyal to England and did not favor or support Spanish and Papal aggression against England, they should be allowed to practice their faith. Of course, Parliament did not support him in this, just as they did not support his efforts to enforce conformity with the Thirty-Nine Articles and the Book of Common Prayer, nor his efforts to ensure that the Church of England received the tithes and fees due to its lands and holdings.
Bancroft was succeeded as Archbishop of Canterbury by George Abbott, who was a Calvinist, opposed completely to the moderation Bancroft proposed regarding Catholics. Abbott urged the marriage of the Princess Elizabeth to Frederick, the Elector Palatine and was against the marriage of the Prince of Wales, Charles to the Infanta of Spain. William Laud would succeed Abbott, returning in some ways to Bancroft's policies of Anglican conformity.
Posted by Stephanie A. Mann at 2:03 AM