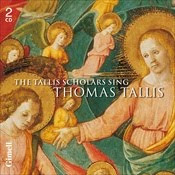 Thomas Tallis, musician and composer, died on November 23, 1585. My favorite recordings of the music of Thomas Tallis are by The Tallis Scholars and Stile Antico.
From the liner notes for The Tallis Scholars Sing Thomas Tallis CD set posted on the Gimell Records website, Peter Phillips comments:
My view of Tallis's genius has only deepened with time. Not only was he the arch-survivor but also, unlike those who trim and so build their monuments on shifting sands, he had the ability to create masterpieces in whatever style was the currency of the day. This should not be underestimated, because those styles changed out of recognition during his eighty-or-so years. First it was the traditional Catholic style of Henry VIII's reign; then it was the most severely chordal Protestant style of Edward VI's reign; then it was back to Latin and Catholic writing again under Mary, though this time in a more mature idiom than in Henry's reign - Tallis was by now turning fifty; then it was the compromise style for Elizabeth whom he served for twenty-six years and who left him sufficiently alone for him to produce some of his greatest music.
The two CD set contains examples from each of Tallis's styles. His first style, Phillips notes, is marked by the use of melismas: "A melisma is a melodic line which only uses one syllable, like the ‘A' of Amen, allowing the composer's imagination to fly free of text-setting. This essentially abstract way of thinking was admired by the pre-Reformation Catholics, and needless to say was particularly objected to by the Protestants."
Tallis's second style, when he wrote for Edward VI: "Nothing could be further removed from the glories of Spem or Gaude gloriosa. Gone are the melismas, the Latin texts, the interweaving of the lines in polyphony. The accent was now on simplicity and comprehension - hence the English texts and the chordal style, which was designed to make the words audible."
And, finally, his mature and late style: "Nowhere is Tallis's mature style more perfectly on display than in his two sets of Lamentations, which in modern times have been the yardstick by which every set of Lamentations of the period is judged, whether English or from the Continent. . . . [In] Tallis's late style . . . he took the prevailing Flemish technique of imitative entries between the voices, built up a full sonority as each voice joined in, and then moved on to the next phrase of words and the next set of entries. It is a transparent idiom in which the words are set more or less syllabically - thus fulfilling the Protestant need for clarity - yet the music is allowed to expand and breathe." 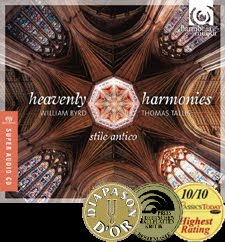 Although Byrd was a genius to rival his teacher, Thomas Tallis, he was not required to write church music in quite so many styles as Tallis did - the political and religious situation in England in Byrd's lifetime was a little more settled. Nonetheless he had to face up to the same basic challenge as Tallis: to write music for the Protestant authorities when arguably his heart wasn't really in it; and to find opportunities to write the kind of music he really wanted to write - for the Catholic liturgy - and not be arrested for it. As in Tallis's time the compositional methods required for those two traditions were different. The Protestants wanted their music to have English words which could be heard, requiring a style which was simple enough to enable that to happen. The Catholic tradition, by this time fairly remote from Byrd, still favoured Latin texts and a style which in theory could be more elaborate. However in practice, as this disc shows, Byrd wrote quite simple music for the Catholics and, as in his Great Service, quite complex music for the Anglicans.

For an artist merely to survive is no mark of success. Perhaps it's anachronistic to assume the same level of artistic struggle to remain true to one's art (as the story of Shostakovich's Fifth Symphony demonstrates, especially with Michael Tilson Thomas's interpretation), but it's hard for me to believe that Tallis could compose the beautiful music he did in these different styles merely as a compromise to the changing religious trends of the Tudor monarchs. I just don't like to think he was a musical "Vicar of Bray". William Byrd, according to the Tallis Scholar's DVD Playing Elizabeth's Tune with its documentary by Charles Hazlewood, makes it clear that Byrd was frustrated by the dual roles he had to play: loyal subject of the monarch and faithful Catholic--did Tallis feel the same frustration?
Posted by Stephanie A. Mann at 2:16 AM