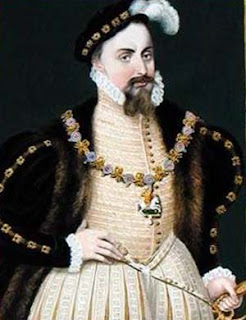 Lady Jane Grey Dudley was accused of treason and tried at the Guildhall in London on November 13, 1553, along with her husband Guildford Dudley. They were found guilty for their roles in subverting the orderly succession as outlined by Henry VIII and Parliament when Edward VI died. Northumberland, who had developed the plot to place his daughter-in-law upon the throne had already been executed.
Mary did not, however, allow the sentences of death by carried out against the Nine Days Queen and the others. Jane and Guildford remained under arrest in the Tower of London, but it was clear to Mary that they had been pawns of Northumberland.
It was not until Jane's father Henry Grey, the Duke of Suffolk (pictured) was implicated in Wyatt's Rebellion in January and February of 1554 that it became clear to Mary that Jane's survival was dangerous to the throne. Jane was a focus of rebellion while she lived. Otherwise, Mary had hoped eventually to release her from the Tower!
Posted by Stephanie A. Mann at 2:20 AM