The Former Bishop of Carlisle Dies 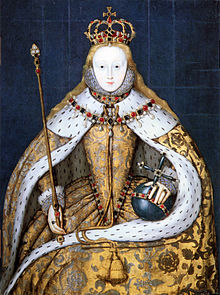 Owen Oglethorpe, who had served Cambridge University as an academic and administrator, and who had celebrated Elizabeth I's Coronation--the only bishop who would--died on December 31, 1559. During the reigns of Henry VIII and Edward VI he had demonstrated, according to the Dictionary of National Biography, an ability to go along with religious changes: "His conduct shows him to have being a man of no strength of character, with little love for the series of religious changes through which the clergy were being hustled, but reluctantly accepting them rather than forego the dignity and emoluments of office."

But after Mary I died, Bishop Oglethorpe at last showed some resolution. Because Reginald Pole, the Cardinal Archbishop of Canterbury had died the same day as Mary I, another bishop was needed to perform the ceremony:

He showed some firmness when called upon to say mass before the queen in the first days of her reign. Elizabeth forbade him to elevate the Host, which, according to a Roman authority, he insisted on doing (Strype, Annals, vol. i. pt. i. p. 73). The coronation soon followed. In the vacancy of the see of Canterbury, it naturally fell to the Archbishop of York to perform the ceremony; but Heath, alarmed by ominous presages of a change in religion, refused to officiate. Tunstall of Durham was too old, and perhaps shared in Heath's objection. It devolved, therefore, on Oglethorpe, as his suffragan, to take his metropolitan's place, and on 16 Jan. 1559, the other diocesan bishops attending, with the exception of Bonner, who, however, lent him his robes for the function, he placed the crown on the head of Elizabeth, but it is asserted that he never forgave himself for an act the momentous consequences of which he hardly foresaw, and remorse for his unfaithfulness to the church is said to have hastened his end. The same month he attended Elizabeth's first parliament, when he expressed his dissent from the bills for restoring the first-fruits and tenths to the crown, and the royal supremacy, the iniquitous forced exchange of bishops' lands for impropriate tithes, and other measures (Strype, Annals, vol. i. pt. i. pp. 82-7). He was also present at the opening of the disputation on religion at Westminster in March 1559, and was one of those who were fined for declining to enter on the dispute when they saw which way things were tending. The fine imposed on him amounted to 250l., and he had to give recognisances for good behaviour (ib. pp. 129, 137-9). On 15 May, together with Archbishop Heath and the other bishops who adhered to the old faith, he was summoned before the queen, and, on their unanimous refusal to take the oath of supremacy, they were all deprived (ib. pp. 206, 210). He only survived his deprivation a few months. He died suddenly of apoplexy on the last day of that year.

He was buried in St. Dunstan-of-the-West on Fleet Street.
Posted by Stephanie A. Mann at 12:30 AM