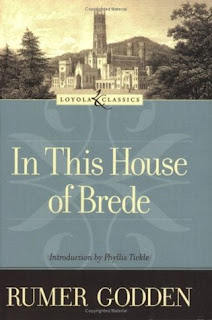 One of my favorite authors, Rumer Godden, was born on December 10, 1907. According to her literary trust website:

Rumer Godden, now a well established Virago Modern Classics author, is considered by many to be one of the foremost English language authors of the 20th century.

Nine of her books have been made into films.

She won The Whitbread Award for Children's Literature in 1972 and was awarded the OBE in 1993.

Her last book, "Cromartie versus The God Shiva Acting through the Government of India" was published by Macmillan in November 1997 and she died in 1998 aged ninety-one.

In 2007 Cambridge University honoured her by holding a Symposium of her work to celebrate her Centenary.

Rumer Godden wrote some 60 works during her life, drawing on her experiences of life in India and Britain.

The influence of India is reflected in "Black Narcissus", "The River", "Kingfisher's Catch Fire", "Breakfast with the Nikolides" and recently republished, "The Lady and the Unicorn". . .

and her interest in the religious life is shown in "In This House of Brede" and "Five for Sorrow Ten for Joy".

My favorite is In This House of Brede, the writing of which brought her to Stanbrook Abbey and the Catholic Church:.

According to her New York Time's obituary:

To do research on ''In This House of Brede,'' Ms. Godden lived for three years near Stanbrook Abbey. Her experience with the nuns there contributed to her decision to convert to Roman Catholicism in 1968. In many of her stories and novels, Ms. Godden would write about the rewards and perils of the contemplative life.

When she went to live near Stanbrook Abbey, she was in touch with both the legacy of the English Reformation and the French Revolution, for the Benedictines at Stanbrook had been exiled nuns from England, having established a convent in Cambrai. The foundress of the Cambrai house was none other than Helen More, the great-great-granddaughter of St. Thomas More. Her name in religion became Dame Gertrude More. The Benedictines at Cambrai were exiled to England just before the Carmelites of Compiegne were condemned to death--the Benedictines came to England wearing the secular clothing of the Carmelites!

It is a marvelous book, demonstrating Godden's interest in the passage of time depicted in fiction (see Take Three Tenses or China Court) and her great sense of drama and conflict in the midst of order and control.
Posted by Stephanie A. Mann at 12:30 AM

Email ThisBlogThis!Share to TwitterShare to FacebookShare to Pinterest
Labels: birthdays, In This House of Brede, novels, Rumer Godden