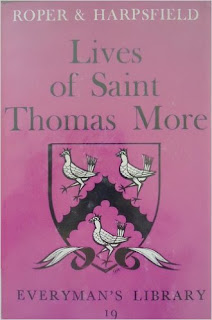 Nicholas Harpsfield died in London on December 18, 1575 after being released from Fleet Prison because he was ill. He had lived through the reigns of four Tudor monarchs, from Henry VIII to Elizabeth I. Closely associated with Roper and More families, he wrote the first biography of St. Thomas More while he was in exile in Louvain during the reign of Edward VI. William Roper had written his recollections of his father-in-law for Harpsfield's use, as E.E. Reynolds, one of the main twentieth century biographers of More, notes in the Everyman's Library edition of the two Lives of Saint Thomas More. Since other More family members  and associates (the Rastells, Clements, and Antonio Bonvisi) were in exile in Louvain, Harpsfield also had access to their memories of More.

When Mary I came to the throne, according to this website:

Nicholas Harpsfield returned to London where he worked closely with Gardiner and Cardinal Reginald Pole, the new Archbishop of Canterbury. He was appointed vicar-general of the capital. "Between November 1554 and March 1558, Harpsfield conducted a sweeping visitation of London which tried around four hundred offenders. The targets of the visitation were well chosen, for in addition to some conspicuous disturbers of the peace, many active and zealous protestants were caught in Harpsfield's net." (10) John Foxe described him as one of the most cruel persecutors of Mary's reign. (11)

In addition to identifying suspected heretics and dissenters, Harpsfield was working to restore what had been destroyed, stolen, or hidden in those London churches, finding the Altar furnishings, liturgical books, and other items needed for the celebration of the Mass and the other Catholic Sacraments.

Harpsfield published his Life of More in 1557 and also wrote propaganda for Mary's reign, including a book describing how the former Archbishop of Canterbury, Thomas Cranmer, had recanted all his former teachings--but of course, Cranmer's final recantation was of that recantation, before he was burned at the stake in Oxford. Harpsfield also wrote a Treatise on the Pretended Divorce, defending Mary I's legitimacy, insisting on the validity of Henry VIII and Catherine of Aragon's marriage, and attacking those who had supported the "divorce".

At the beginning of Elizabeth I's reign, Harpsfield, as Archdeacon of Canterbury Cathedral, refused to acknowledge the religious settlement by opposing the new Archbishop of Canterbury, Matthew Parker:

Harpsfield led a majority of the members of the Canterbury chapter in their refusal to attend the election of Parker. Harpsfield was stripped of all of his ecclesiastical offices and livings and sent to Fleet Prison. (18) Later that year Parliament passed the Act of Supremacy and the Act of Uniformity. . . .

and Harpsfield refused to swear Oaths assenting to those Acts, so remained in the Fleet for 12 years. He continued to write, attacking John Foxe and his Acts and Monuments, and compiling his Historia Anglicana Ecclesiastica. According to Thomas S. Freeman, writing in the Oxford Dictionary of National Biography:

This book is divided into two parts. The first part presents a history of each English diocese, emphasizing the apostolic succession of the bishops, the preservation of true doctrine, and the growth of monasticism. The second part, in contrast to this history of the true church... This is a skilful (sic) synthesis of... historical works of Henry Knighton, Thomas Netter, and Thomas Walsingham, which had depicted Lollardy as a continuation of ancient heresies and as a source of anarchy and rebellion. (21)

According to Reynolds, while Nicholas Harpsfield--and his brother John, the former Archdeacon of London and Dean of Norwich--were held in the Fleet for refusing to swear to the Acts of Supremacy and Uniformity, William Roper continued to support him. John Harpsfield was also released from the Fleet on grounds of illness, in 1574 but died in the custody of the Bishop of Lincoln.
Posted by Stephanie A. Mann at 1:00 AM