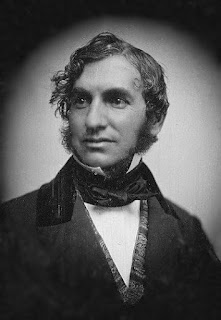 "Hads't thou stayed, I must have fled!"
That is what the Vision said.

In his chamber all alone,
Kneeling on the floor of stone,
Prayed the Monk in deep contrition
For his sins of indecision,
Prayed for greater self-denial
In temptation and in trial;
It was noonday by the dial,
And the Monk was all alone.
Suddenly, as if it lightened,
An unwonted splendor brightened
All within him and without him
In that narrow cell of stone;
And he saw the Blessed Vision
Of our Lord, with light Elysian
Like a vesture wrapped about him,
Like a garment round him thrown.

Not as crucified and slain,
Not in agonies of pain,
Not with bleeding hands and feet,
Did the Monk his Master see;
But as in the village street,
In the house or harvest-field,
Halt and lame and blind he healed,
When he walked in Galilee.

In an attitude imploring,
Hands upon his bosom crossed,
Wondering, worshipping, adoring,
Knelt the Monk in rapture lost.
Lord, he thought, in heaven that reignest,
Who am I, that thus thou deignest
To reveal thyself to me?
Who am I, that from the centre
Of thy glory thou shouldst enter
This poor cell, my guest to be?

Then amid his exaltation,
Loud the convent bell appalling,
From its belfry calling, calling,
Rang through court and corridor
With persistent iteration
He had never heard before.
It was now the appointed hour
When alike in shine or shower,
Winter's cold or summer's heat,
To the convent portals came
All the blind and halt and lame,
All the beggars of the street,
For their daily dole of food
Dealt them by the brotherhood;
And their almoner was he
Who upon his bended knee,
Rapt in silent ecstasy
Of divinest self-surrender,
Saw the Vision and the Splendor.
Deep distress and hesitation
Mingled with his adoration;_
Should he go, or should he stay?
Should he leave the poor to wait
Hungry at the convent gate,
Till the Vision passed away?
Should he slight his radiant guest,
Slight this visitant celestial,
For a crowd of ragged, bestial
Beggars at the convent gate?
Would the Vision there remain?
Would the Vision come again?
Then a voice within his breast
Whispered, audible and clear
As if to the outward ear:
"Do thy duty; that is best;
Leave unto thy Lord the rest!"

Straightway to his feet he started,
And with longing look intent
On the Blessed Vision bent,
Slowly from his cell departed,
Slowly on his errand went.

At the gate the poor were waiting,
Looking through the iron grating,_
With that terror in the eye
That is only seen in those
Who amid their wants and woes
Hear the sound of doors that close,
And of feet that pass them by;
Grown familiar with disfavor,
Grown familiar with the savor
Of the bread by which men die!
But to-day, they knew not why,
Like the gate of Paradise
Seemed the convent gate to rise,
Like a sacrament divine
Seemed to them the bread and wine.
In his heart the Monk was praying,
Thinking of the homeless poor,
What they suffer and endure;
What we see not, what we see;
And the inward voice was saying:
"Whatsoever thing thou doest
To the least of mine and lowest,
That thou doest unto me!"

Unto me! but had the Vision
Come to him in beggar's clothing,
Come a mendicant imploring,
Would he then have knelt adoring,
Or have listened with derision,
And have turned away with loathing.

Thus his conscience put the question,
Full of troublesome suggestion,
As at length, with hurried pace,
Towards his cell he turned his face,
And beheld the convent bright
With a supernatural light,
Like a luminous cloud expanding
Over floor and wall and ceiling.

But he paused with awe-struck feeling
At the threshold of his door,
For the Vision still was standing
As he left it there before,
When the convent bell appalling,
From its belfry calling, calling,
Summoned him to feed the poor.
Through the long hour intervening
It had waited his return,
And he felt his bosom burn,
Comprehending all the meaning,
When the Blessed Vision said,
"Hadst thou stayed, I must have fled!"

Henry Wadsworth Longfellow was a commanding figure in the cultural life of nineteenth-century America. Born in Portland, Maine in 1807, he became a national literary figure by the 1850s, and a world-famous personality by the time of his death in 1882. He was a traveler, a linguist, and a romantic who identified with the great traditions of European literature and thought. At the same time, he was rooted in American life and history, which charged his imagination with untried themes and made him ambitious for success.

This poem is from Longfellow's 1863 Tales of a Wayside Inn, told by the Theologian in this Chaucerian group:

A Theologian, from the school
Of Cambridge on the Charles, was there;
Skilful alike with tongue and pen,
He preached to all men everywhere
The Gospel of the Golden Rule,
The New Commandment given to men,
Thinking the deed, and not the creed,
Would help us in our utmost need.
With reverent feet the earth he trod,
Nor banished nature from his plan,
But studied still with deep research
To build the Universal Church,
Lofty as in the love of God,
And ample as the wants of man.

More about Tales of Wayside Inn here. Note that this collection includes the famous poem about Paul Revere's midnight ride: "Listen, my children, and you shall hear . . ."