435 Years Ago Today at Tyburn 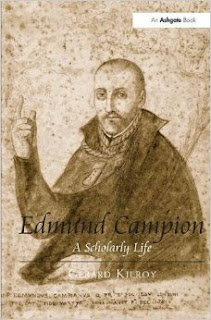 From Gerard Kilroy, Edmond Campion biographer extraordinaire, a reflection on the response in England and abroad after his execution on December 1, 1581:

Edmund Campion was hanged (he was spared the pain of disembowelling while alive by the intervention at Tyburn of Lord Charles Howard) on 1 December 1581. Within six weeks, the English Ambassador in Paris, Sir Henry Cobham, was writing to Sir Francis Walsingham, Secretary to the Privy Council.

"I sent you a small book on the death of Campion. They have been crying these books in the streets with outcries naming them to be cruelties used by the Queen of England."

L’Histoire de la Mort que le R. P. Edmund Campion may have been small, but it caused a big stir in Paris; in London, many accounts, in prose and verse, of his trial and martyrdom were already circulating in manuscript, and were in print by February 1582. Scribes such as Stephen Vallenger, who had written accounts of Campion’s four disputations in the Tower of London, or printers like Blessed William Carter, who had paid men to copy accounts by hand, were captured, tortured and (in Vallenger’s case) mutilated. The Recorder of London, William Fleetwood, seized the printing press where the first English account, A true reporte of the death and martyrdome, was printed. Richard Verstegan, the printer, escaped to Paris, and immediately turned to producing broadsheets and engravings of the martyrdom. By 1584, his engravings were circulating (sometimes improved by Italian engravers like Cavalieri) all over Europe, and the Queen and her Privy Council were forced to defend themselves against a veritable tide of hostileprint from Wilno to Rome. Two of the best prose writers in English, Robert Persons and William Allen, both personally attached to Campion, launched book after book setting out the injustices of a benighted country and attached Verstegan’s engravings to their writings. Meanwhile poems, like Henry Walpole’s ‘Why do I use my paper, ynke and penne?’, circulated secretly among courtiers, lawyers and gentry; William Byrd set this poem to music, and settings for lute and voice survive.

The Elizabethan regime may have dismembered Campion’s body, but the battle over his reputation was as fierce as the battle over the body of Patroclus in the Iliad. The topic was still contentious in 1587 when the censors, in the week before the execution of Mary, Queen of Scots, took out 47 lines asserting that Campion died for religion from the work we know as ‘Holinshed’, the ‘Continuation’ of the Chronicles of England, Scotland, and Ireland.

What was lost in all this noise was Edmundus Campianus Anglus Londinensis, the boy born in the heart of the printing trade, Paul’s Churchyard, son of an anti-Catholic publisher also called Edmund, schoolboy prodigy at St Paul’s (1547-52) and Christ’s Hospital (1552-57), who was chosen to address the new queen, Mary Tudor. Also lost was Edmundus Campianus Oxoniensis, the brilliant Oxford scholar (1557-70) who could turn a speech on the earth and moon into a subtle plea to the Queen and the Earl of Leicester not to interfere in the university’s affairs; and the carefree, companionable novice in Brno (1573-74) and lecturer in rhetoric in Prague (1574-80), whose drafts for student performances on feast days like Corpus Christi or All Souls survive in autograph at Stonyhurst. And, of course, Edmund Campion, the affectionate friend who effortlessly attracted patrons and friends among merchants, aldermen, nobles and foreign princes.