The Pilgrimage of Grace and Religion in Northern England 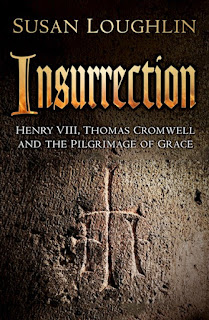 I start reading a non-fiction book at the back: I check for an index, look at the list of works cited or consulted and glance at the notes. At the back of this book, Insurrection: Henry VIII, Thomas Cromwell and The Pilgrimage of Grace, I read the Acknowledgement from the author, Susan Loughlin, and saw something that could strike fear into a reader's heart: this book was based upon her doctoral thesis or dissertation.

Obviously, however, Loughlin either wrote an extremely readable and accessible thesis or rewrote it ably to make it accessible to a non-academic though educated and interested reader. She kindly sent me a copy of her book for my opinion of it and I think it is not only a great study of the Pilgrimage of Grace but also a convincing test of the Christopher Haigh theory of the English Reformation as something which was imposed from above and slowly adopted in the country.

Loughlin argues cogently that the Pilgrimage of Grace was a mostly grassroots protest against the religious changes that were being proclaimed and slowly enforced in 1536 and the dissolution of the smaller monasteries that Thomas Cromwell, Henry VIII's Vice Regent in Spiritual matters was coordinating.

As the publisher describes the book:

Autumn 1536. Katherine of Aragon and Anne Boleyn are dead. Henry VIII has married Jane Seymour, and still awaits his longed for male heir. Disaffected conservatives in England see an opportunity for a return to Rome and an end to religious experimentation, but Thomas Cromwell has other ideas. The Dissolution of the Monasteries has begun and the publication of the Lutheran influenced Ten Articles of the Anglican Church has followed. The obstinate monarch, enticed by monastic wealth, is determined not to change course. Fear and resentment is unleashed in northern England in the largest spontaneous uprising against a Tudor monarch – the Pilgrimage of Grace – in which 30,000 men take up arms against the king. This book examines the evidence for that opposition and the abundant examples of religiously motivated dissent. It also highlights the rhetoric, reward and retribution used by the Crown to enforce its policy and crush the opposition.

Loughlin also examines the pattern of patronage and bribery the Crown and Cromwell practiced to enforce loyalty to the monarch and acceptance of the religious changes, in addition to the punishment Henry VIII wanted meted out to those he regarded as rebels. It's rather terrifying because this patronage seems to have a corrupting effect on the recipient, who grovels before Cromwell, begging to be useful and begging to be accepted as loyal and true--but he will have to keep proving it, and will receive more honors, and so on, and so on, in a pattern of sycophancy. And of course, the process of sharing and selling the lands and buildings of the larger monasteries, the Court of Augmentations, would create an even closer bond between the recipients and the monarch, so that even those who were devout Catholics and did not agree with Lutheran doctrine or theology would go along with the religious changes, at least apparently.