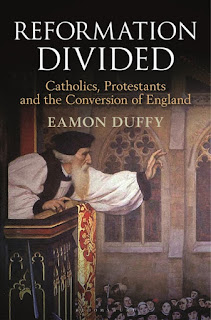 In February 2017, Bloomsbury Continuum will publish Eamon Duffy's contribution to the 500th anniversary of the Protestant Reformation: Reformation Divided: Catholics, Protestants and the Conversion of England:

Published to mark the 500th anniversary of the events of 1517, Reformation Divided explores the impact in England of the cataclysmic transformations of European Christianity in the sixteenth and seventeenth centuries. The religious revolution initiated by Martin Luther is usually referred to as 'The Reformation', a tendentious description implying that the shattering of the medieval religious foundations of Europe was a single process, in which a defective form of Christianity was replaced by one that was unequivocally benign, 'the midwife of the modern world'. The book challenges these assumptions by tracing the ways in which the project of reforming Christendom from within, initiated by Christian 'humanists' like Erasmus and Thomas More, broke apart into conflicting and often murderous energies and ideologies, dividing not only Catholic from Protestant, but creating deep internal rifts within all the churches which emerged from Europe's religious conflicts.

The book is in three parts: In 'Thomas More and Heresy', Duffy examines how and why England's greatest humanist apparently abandoned the tolerant humanism of his youthful masterpiece Utopia, and became the bitterest opponent of the early Protestant movement. 'Counter-Reformation England' explores the ways in which post-Reformation English Catholics accommodated themselves to a complex new identity as persecuted religious dissidents within their own country, but in a European context, active participants in the global renewal of the Catholic Church. The book's final section 'The Godly and the Conversion of England' considers the ideals and difficulties of radical reformers attempting to transform the conventional Protestantism of post-Reformation England into something more ardent and committed. In addressing these subjects, Duffy shines new light on the fratricidal ideological conflicts which lasted for more than a century, and whose legacy continues to shape the modern world.

I'm sure it will be fascinating and enlightening! I'm working on getting a review copy!
Posted by Stephanie A. Mann at 1:00 AM