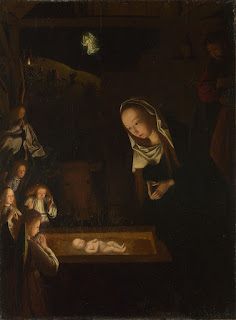 In the UK Catholic Herald magazine, Melanie McDonagh promotes celebrating/observing the Christmas season until Candlemas (February 2), bringing the season to the biblical 40 days:

One of the downsides of starting Christmas so soon is that it finishes too soon. Obviously, if the season starts commercially just after Halloween, and the Christmas lights go on at the beginning of November, and the party season gets going in early December, you’re over the celebrations by St Stephen’s, or Boxing Day, with one last hurrah on New Year’s Eve. As an uncle of mine used to say dolefully, after tea on Christmas Day: “That’s Christmas over for another year.” Wrong, obviously. Christmas goes on for Twelve Days, Christmas Eve to Epiphany, a feast we do not keep by putting the bald Christmas trees out.

In fact, I’d say myself that we shouldn’t give up on Christmas until Candlemas, February 2. That was the way the Church’s calendar intended it: the Christmas season extended right through the second most dispiriting month of the year, right into the most depressing one. January without Christmas can be a downbeat month, but if we think of it as a modified extension of the Christmas season, it has an altogether different character.

There couldn’t be a worse time for the New Year, New You thing of giving up starchy carbs; this is exactly the time we should be eating them, having our friends round. It’s still the time for filling your house with candles and greenery, and entertaining. Candlemas Eve, not Epiphany, used to be the time when people took down their sprays of greenery, holly and ivy. As Robert Herrick put it in his poem for the Eve: “Down with the Rosemary and Bayes, down with the Mistletoe; Instead of Holly now up-raise the greener Box, for show…” And so on, with all the green stuff of Christmas being replaced with their springtime equivalents, to celebrate Whitsun or Easter. 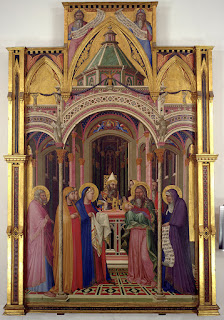 The article is illustrated with a picture of Christmas trees being thrown away. Of course, if you've had a "live" tree up since Thanksgiving, you might need to dispose of it (we recycle ours) well before February 2! But she's right that we need to keep Christmas going. I find the calendar of the Extraordinary Form of the Latin Rite to help, because instead of jumping right into a short portion of Ordinary Time after the Feast of the Baptism of Our Lord, it continues with the Season after Epiphany. Just seeing that term Epiphany for each Sunday between January 6 and February 2 reminds me that we are still celebrating Christmas, at least liturgically.

But for now we are celebrating the Nativity of Jesus in the Octave of the Christmas Feast. Happy Feast of St. John, the beloved disciple! Happy second day of Christmas, 2016-2017! Merry Christmas!
Posted by Stephanie A. Mann at 12:30 AM