This is Real: The Incarnation 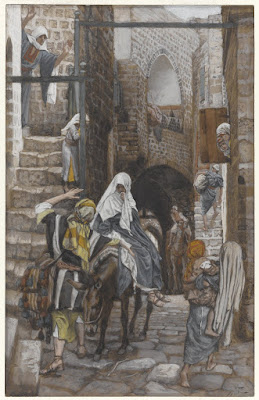 What I have been saying comes to this:—be in earnest, and you will speak of religion where, and when, and how you should; aim at things, and your words will be right without aiming. There are ten thousand ways of looking at this world, but only one right way. The man of pleasure has his way, the man of gain his, and the man of intellect his. Poor men and rich men, governors and governed, prosperous and discontented, learned and unlearned, each has his own way of looking at the things which come before him, and each has a wrong way. There is but one right way; it is the way in which God looks at the world. Aim at looking at it in God's way. Aim at seeing things as God sees them. Aim at forming judgments about persons, events, ranks, fortunes, changes, objects, such as God forms. Aim at looking at this life as God looks at it. Aim at looking at the life to come, and the world unseen, as God does. Aim at "seeing the King in his beauty." All things that we see are but shadows to us and delusions, unless we enter into what they really mean.

It is not an easy thing to learn that new language which Christ has brought us. He has interpreted all things for us in a new way; He has brought us a religion which sheds a new light on all that happens. Try to learn this language. Do not get it by rote, or speak it as a thing of course. Try to understand what you say. Time is short, eternity is long; God is great, man is weak; he stands between heaven and hell; Christ is his Saviour; Christ has suffered for him. The Holy Ghost sanctifies him; repentance purifies him, faith justifies, works save. These are solemn truths, which need not be actually spoken, except in the way of creed or of teaching; but which must be laid up in the heart. That a thing is true, is no reason that it should be said, but that it should be done; that it should be acted upon; that it should be made our own inwardly.

Let us avoid talking, of whatever kind; whether mere empty talking, or censorious talking, or idle profession, or descanting upon Gospel doctrines, or the affectation of philosophy, or the pretence of eloquence. Let us guard against frivolity, love of display, love of being talked about, love of singularity, love of seeming original. Let us aim at meaning what we say, and saying what we mean; let us aim at knowing when we understand a truth, and when we do not. When we do not, let us take it on faith, and let us profess to do so. Let us receive the truth in reverence, and pray God to give us a good will, and divine light, and spiritual strength, that it may bear fruit within us.

And from his sermon on "The Incarnation":

Let us then, according to the light given us, praise and bless Him in the Church below, whom Angels in heaven see and adore. Let us bless Him for His surpassing loving-kindness in taking upon Him our infirmities to redeem us, when He dwelt in the inner-most love of the Everlasting Father, in the glory which He had with Him before the world was. He came in lowliness and want; born amid the tumults of a mixed and busy multitude, cast aside into the outhouse of a crowded inn, laid to His first rest among the brute cattle. He grew up, as if the native of a despised city, and was bred to a humble craft. He bore to live in a world that slighted Him, for He lived in it, in order in due time to die for it. He came as the appointed Priest, to offer sacrifice for those who took no part in the act of worship; He came to offer up for sinners that precious blood which was meritorious by virtue of His Divine Anointing. He died, to rise again the third day, the Sun of Righteousness, fully displaying that splendour which had hitherto been concealed by the morning clouds. He rose again, to ascend to the right hand of God, there to plead His sacred wounds in token of our forgiveness, to rule and guide His ransomed people, and from His pierced side to pour forth his choicest blessings upon them. He ascended, thence to descend again in due season to judge the world which He has redeemed.—Great is our Lord, and great is His power, Jesus the Son of God and Son of man. Ten thousand times more dazzling bright than the highest Archangel, is our Lord and Christ. By birth the Only-begotten and Express image of God; and in taking our flesh, not sullied thereby, but raising human nature with Him, as He rose from the lowly manger to the right hand of power,—raising human nature, for Man has redeemed us, Man is set above all creatures, as one with the Creator, Man shall judge man at the last day. So honoured is this earth, that no stranger shall judge us, but He who is our fellow, who will sustain our interests, and has full sympathy in all our imperfections. He who loved us, even to die for us, is graciously appointed to assign the final measurement and price upon His own work. He who best knows by infirmity to take the part of the infirm, He who would fain reap the full fruit of His passion, He will separate the wheat from the chaff, so that not a grain shall fall to the ground. He who has given us to share His own spiritual nature, He from whom we have drawn the life's blood of our souls, He our brother will decide about His brethren. In that His second coming, may He in His grace and loving pity remember us, who is our only hope, our only salvation!

Illustration: James Tissot, "Joseph Seeks a Lodging in Bethlehem"
Posted by Stephanie A. Mann at 12:30 AM