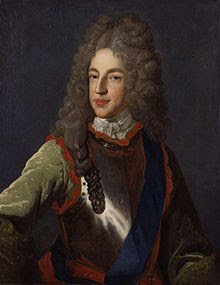 James Francis Edward Stuart--James III to Jacobite supporters--died on January 1, 1766 in Rome at the Palazzo Muti. Popes Clement XI and Innocent XIII had supported his claim to the throne of England, and he could have become King James III, if he had renounced the Catholic faith and become an Anglican. Father Dwight Longenecker explains in a post from the Imaginative Conservative:

The story of King James III is a romantic tale of a man who refused to give up his Catholic faith for the throne of England. . . .

On his death in 1701 James’ II’s oldest son became the rightful claimant of the throne of England. James Francis Edward Stuart, Prince of Wales was recognized as King James III by France, Spain and the Papal States, but he was accused of treason at home and known by his enemies as “The King Over the Water” or “The Old Pretender.” In 1708 James attempted an invasion of England through Scotland but was intercepted by the English. The French admiral in charge of James’ fleet retreated. By 1710 James’ other half-sister Anne was on the throne of England. She offered for James to be restored to the throne if he converted to the Protestant faith. He refused.

Three years later Queen Anne was close to death. In 1714 her agents were in secret correspondence with James III. They told him the queen was dying and indicated that if he converted to the Protestant faith the way would be open for him to ascend the throne. He wrote, “I have chosen my own course, therefore it is for others to change their sentiments.” Because of James’ refusal to give up his Catholic faith, the English looked for another monarch. More than fifty members of the royal houses of Europe were a closer blood relation to Queen Anne, but they were barred from the throne by their Catholic religion. Therefore at the Queen’s death, a German prince from the House of Hanover was offered the throne of England and became George I.

Pope Clement XI offered the disappointed King the Palazzo Muti in Rome and James set up his court in exile. His attempts to regain the throne failed and he suffered from melancholy and depression. He became known as “Old Mr. Misfortunate” and grew increasingly frail and despondent.

The Old Pretender's marriage to Maria Clementina Sobieska, grand-daughter of the great victor of Vienna, was unhappy. She accused him of adultery and fled to a convent; it was two years before they reconciled. James III had been raised at St. Germain-en-Laye in France to be a king, receiving the education necessary to prepare him for that role; but he had also been raised as an observant Catholic and would not apostatize. His son, the Young Pretender, Bonnie Prince Charlie, would attempt a brief foray into Anglicanism, hoping to find support for the throne, but failed too and then repented and returned to the Catholic faith.
James III is rather the opposite of Henri IV of France--England was not well worth giving up the Mass!

After his death, the body lay in state for five days at the Basilica of the Holy Apostles before being interred in the crypt of St. Peter's Basilica. Last year (2016!) marked the 250th anniversary of his death and the British ambassador to the Holy See laid a wreath at James III's tomb in memory of his funeral on January 8, 1766--with the permission of Her Majesty, Queen Elizabeth II:

The commemoration ceremony consisted of a simple wreath-laying and the appropriate Collect (in English) by HM Ambassador Baker, the reading of the Rite of Commendation (in Latin) by HE Angelo Cardinal Comastri, Archpriest of St Peter’s Basilica, and the sung Antiphon In Paradisum Deducant Te Angeli.

HM Ambassador was accompanied by the Rt Rev Monsignor Charles Burns, Ecclesiastical Advisor at the British Embassy to the Holy See. H.E. Archbishop Paul Gallagher, Holy See Secretary for Relations with States, and H.E. Archbishop Arthur Roche, Secretary Congregation for Divine Worship and the Discipline of Sacraments, attended from the Holy See.

Other participants included Lord and Lady Nicholas Windsor, the Polish and Irish Ambassadors to the Holy See, the Rectors of the Pontifical Beda, Scots, Irish and Venerable English Colleges, and ecumenical representatives.
Posted by Stephanie A. Mann at 12:30 AM