The Blood of the Martyrs 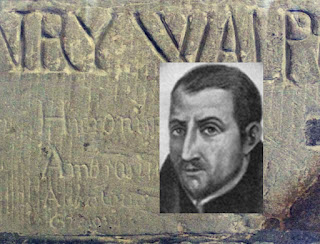 Henry Walpole was 23 years old when he stood near Tyburn Tree. He was a well-educated Englishman and was a loyal member of Her Majesty’s Church of England. After attending Cambridge University (Peterhouse College) he was preparing for a legal career, studying at Grey’s Inn in London. What he witnessed that December day was the excruciating death of a traitor: Campion and the other priests with him (Father Ralph Sherwin and Father Alexander Briant) were first hanged until barely conscious, then eviscerated while still alive, beheaded, and quartered (their bodies divided into four parts). Their heads and quarters would be displayed as warnings to others not to follow their example.

In Walpole’s case, this brutal execution had the opposite effect: some of Campion’s blood splashed on him. Perhaps Campion’s last words also inspired him: “I am a Catholic man and a priest. In that faith have I lived and in that faith do I intend to die, and if you esteem my religion treason, then I am guilty. As for any other treason, I never committed. I stand condemned for nothing but the saying of Mass, hearing confessions, preaching and such like duties and functions of priesthood.”