My husband surprised me with a wonderful Christmas gift: a portrait of St. Thomas More by Pieter Paul Rubens (after the famous portrait by Hans Holbein). When Crisis Magazine published my article on St. Thomas More in June this year, they used a detail of this portrait: 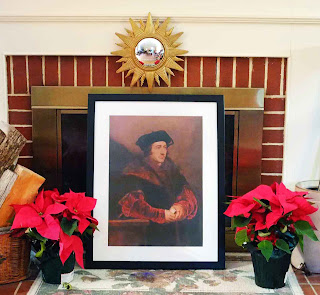 He gave me hints to find the hidden present--he had kept me away from the door when it was delivered earlier in the week--and then we hung it in our living room beside our secretary: 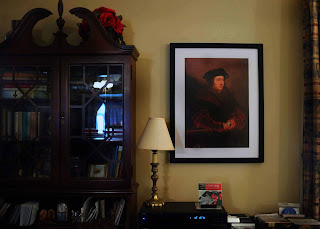 Pieter Paul Rubens' version of Holbein's portrait--which is itself a great work of character and introspection--depicts More as a little more vulnerable. More is not wearing his Collar of Esses with the Tudor Rose nor is he set against such a rich background as in Holbein's original. According to the Museo del Prado:

This is a free copy [meaning that Rubens copied it freely with his own interpretation] of Hans Holbein´s portrait of the Thomas More, the English humanist and statesman. He wears a cape with a fur collar and a magistrate's cap. In his hands, he holds a paper alluding to his condition as an intellectual. Holbein was a favorite of Rubens, who copied his works on numerous occasions, especially at the beginning of his career. The present portrait was made in the sixteen twenties and reflects his great interest in the northern esthetic, as well as his approach to the world of humanist philosophy. It is first listed in 1746 in Isabel Farnesio´s collection at the La Granja Palace.

Dame Alice More wrote to Henry VIII during the Christmas of 1534, begging Henry to be merciful to her husband, herself, and Thomas's son John. Since Thomas More had been attainted a traitor, all his assets were forfeit to the Crown; Alice was afraid that she and John would be left without resources. Alice also asked Henry to have mercy on her husband because he was ill ("great continual sickness of body and heaviness of heart"). She asked Henry to release her Thomas More to her care and declared herself to be Henry's beadswoman, praying for him constantly.
Posted by Stephanie A. Mann at 1:00 AM