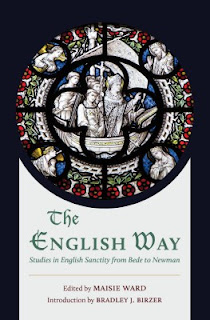 Cluny Media sent me a copy of this book for my opinion. As the blurb states:

The English Way, edited by one of the most important Christian humanists and publishers of the twentieth century, Maisie Ward, looks at the lives, ideas, and deaths of the great Roman Catholic Anglo-Saxons. All the men and women in this book served the Church faithfully and with great zeal. Contributors to The English Way include Bede Jarrett and Christopher Dawson, Hilaire Belloc and G. K. Chesterton, as well as E. I. Watkin and Maisie Ward herself.

It's a collection of essays about the great English saints of the medieval and recusant era written by the English greats of the early twentieth century. It includes not just the great Anglo-Saxon saints, but the holy men and women of the post-Reformation era. As with all of these compilations, there is a variety of writing styles and voices, academic and popular.

The passion the writers felt for their subjects often comes through strongly, as when Christopher Dawson laments that the greatest religious poem in English history, The Vision of Pier Plowman by William Langland, was not available to the public in an affordable and complete edition:

Here is the Catholic Englishman par excellence, at once the most English of Catholic poets and the most Catholic of English poets; a man in whom Catholic faith and national feeling are fused in a single flame. He saw Christ walking in English fields in the dress of an English laborer, and to understand his work is to know English religion in its most autochthonous and yet most Catholic form.

[autochthonous means indigenous; I had to look it up!]

Dawson goes on to tell us that Langland tells us much about the fourteenth century, that "age of profound social and spiritual change", "an age of poets and mystics and saints." He notes that England came into its own as English in that century, and compares and contrasts the two great poets of the era in England, Geoffrey Chaucer and William Langland. Dawson's essay is a masterpiece of literary exposition and historical explanation. He sees Langland as a great prophet and poet, and has inspired me to search out a readable edition.

Cluny Media has done a great service to readers to bring this book back into print. I have some caveats, however, about their edition. I think we need brief biographies of the contributors, who would have been well known--and some still will be of course-when the book was published. Many of the names were familiar to me, but who was Fr. Aelfric Manson, O. P., who writes about St. Boniface?

In an otherwise sympathetic and helpful introduction, Bradley Birzer commits a strange error, dating the beatification of Saints John Fisher and Thomas More to 1935, "only two years after the appearance of The English Way." Fisher and More were beatified in 1886--they were canonized in 1935!

There are some formatting errors too--the wrong author is cited on page 50, for example. The heading for the essay on St. Edmund Campion indicates the essay is about St. Thomas More. In a book dedicated to "Studies in English Sanctity" these are minor things of course. The English Way is great book to read through to see the variety of English saints and Catholic heroes and heroines, and also great just to pick up and read about a certain saint. Highly recommended.
Posted by Stephanie A. Mann at 12:30 AM