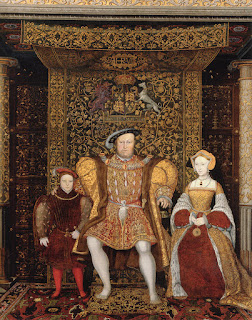 Henry VIII made his last speech to Parliament on December 24, 1545. He was concerned about religious discord in his empire and the effect it was having on the people. Edward Hall (author of Hall's Chronicle) wrote down the speech as he heard it:

Now, since I find such kindness on your part towards me, I cannot choose but to love and favor you, affirming that no prince in the world more favors his subjects than I do you, and no subjects or commons more love and obey their sovereign lord than I see you do me, for whose defense my treasure shall not be hidden, nor if necessity requires it will my person be not risked. But although I with you and you with me are in this perfect love and concord, this friendly amity cannot continue unless both you, my lords temporal, and you, my lords spiritual, and you, my loving subjects, study and take pains to amend one thing which is surely amiss and far out of order, which I most heartily require you to do, which is that charity and concord is not amongst you, but discord and dissension bears rule in every place. St Paul wrote to the Corinthians, in the 12th chapter: ‘Charity is gentle, Charity is not envious, Charity is not proud,’ and so on in that chapter. Behold then what love and charity is amongst you when one calls another heretic and anabaptist and he calls him back papist, hypocrite, and pharisee. Are these tokens of charity amongst you? No, no, I assure you that this lack of charity amongst yourselves will be the hindrance and assuaging of the fervent love between us, as I said before, unless this is healed and clearly made whole. I must judge the fault and occasion of this discord to be partly the negligence of you, the fathers and preachers of the spirituality. For if I know a man who lives in adultery I must judge him to be a lecherous and carnal person; if I see a man boast and brag about himself I cannot but deem him a proud man. I see and hear daily that you of the clergy preach against each other without charity or discretion. Some are too stiff in their old ‘Mumpsimus’, others are are too busy and curious in their new ‘Sumpsimus’. Thus almost all men are in variety and discord, and few or none truly and sincerely preach the word of God as they ought to do. Shall I now judge you to be charitable persons who do this? No, no, I cannot do so. Alas, how can the poor souls live in concord when you preachers sow amongst them in your sermons debate and discord? They look to you for light and you bring them darkness. Amend these crimes, I exhort you, and set forth God’s word truly, both by true preaching and giving a good example, or else, I, whom God has appointed his vicar and high minister here, will see these divisions extinct, and these enormities corrected, according to my true duty, or else I am an unprofitable servant and an untrue officer’. . .

Peter Marshall traces the history of the phrase Henry VIII uses: "Some are too stiff in their old ‘Mumpsimus’, others are are too busy and curious in their new ‘Sumpsimus’." and finds that Desiderius Erasmus was the source. In 1516, Erasmus referred in a letter to an anecdote about "a certain priest" who refused to change the words he prayed when he offered Mass, even though he was told there was a misprint. Where his Missal read "mumpsimus" it should have read "sumpsimus". Erasmus was reacting against those who rejected his corrections of the Vulgate text of the Holy Bible, his Novum Instrumentum. Reformers in England particularly liked the metaphor, using it to attack not just "a certain priest" but all Catholic priests as ignorant and lazy--even though Bishop John Fisher, with the aid of Henry VIII's grandmother Margaret Beaufort--had been working to educate priests better.

But when Henry VIII added to the intrepration of the  metaphor, as Marshall calls it, was the attack against those who insist on their "sumpsimus" as being "too busy and curious". Nevertheless, Marshall concludes: "As informed contemporaries would have recognised, the king’s bon mot was not quite so even-handed as it would first appear: sumpsimus is, at worst, pedantry, while mumpsimus is just plain wrong."

What was included in Henry VIII's "mumpsimus"? Certainly not the belief in the Real Presence of Jesus Christ in the Holy Eucharist. Some forms of "sumpsimus" rejected that, but Henry VIII always defended it. Probably not "the priesthood of all believers"--Henry VIII knew that the Sacrifice of the Mass required a sacramental priesthood, ordained and anointed just as he thought he was as king. Probably not some of crucial Lutheran theories of salvation and authority: sola scriptura, sola fidei, sola gratia. Certainly the spiritual and ecclesiastical authority and supremacy of the Holy Roman Pontiff. Henry VIII clearly rejected that part of the old "mumpsimus"!

As Peter Marshall concludes, Henry VIII's last parliamentary speech and its bon mot illustrate the problem:  "It would perhaps be difficult to find a more perfect encapsulation of the idiosyncratic religious outlook of Henry VIII and of the complexities and ambiguities of the reforming processes he initiated; processes which, in 1545,he was trying, and failing, to bring under control."

How about this for a summation: "Happy Christmas and try to read my mind on what I believe!"

Illustration credit. This portrait from 1545 depicts Henry VIII, his heir Prince Edward, and Edward's late mother, Jane Seymour. Henry VIII was married to Katherine Parr at the time.
Posted by Stephanie A. Mann at 1:00 AM