Background to Our Ozark Advent Adventure 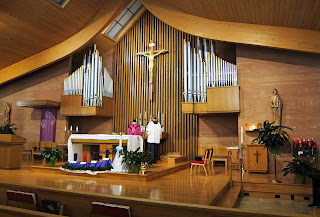 My latest blog post at the National Catholic Register is about our attendance at two Masses on the First Sunday of Advent at St. Peter the Fisherman in Mountain Home, Arkansas, and it concludes:

Continuing the theme of paying attention, we drove back to our cabin again on the winding roads in darkness and pouring rain. As we navigated the twisting road, reminded by signs to slow down, watch out for deer, and be prepared for falling rock, we reflected upon the two Masses we’d attended and the glimpse of a parish community we’d experienced on the First Sunday of Advent in the Ozarks. We’d seen the universality of the Church with priests from Poland and Nigeria and Dominican Sisters from a congregation founded in Poland, the ageless celebration of the Mass in both forms of the Latin liturgy, and the welcome to the stranger that a parish community is prepared to give, knowing that visitors are sure to come to Sunday Mass.

We found out more about the two priests who celebrated Mass at St. Peter the Fisherman from the diocesan newspaper, the Arkansas Catholic.

Father Stanislas Swiderski was indeed born in Poland and he was a student of Pope St. John Paul II! Like Karol Wojtyla, he lived under the oppression of the Soviets:

Father Swiderski entered the seminary in 1956 and was ordained Oct. 11, 1963, just four days past his 24th birthday. He settled into the daily routine of ministering to the faithful and while he didn’t suffer direct persecution as a priest, things like traffic restrictions reminded him of the religious choke chain the Soviets held on the Poles.

Still, one of his earliest lessons was that official ideology and actual practice were often very different things.

“There were a number of high-ranking Communist officials, we called them radishes,” he said. “They were red on the outside and white on the inside. We would have parish missions or Lenten retreats, and there would be hours and hours of confessions. The leaders would usually come at night to make theirs so people didn’t know what they were doing. We called them Nicodemuses because of how he came to see Jesus at night.”

As much as he drew strength for his vocation from the devout, Father Swiderski also took note of those who received sacraments under cover of darkness. Rather than condemn them as hypocrites, he took hope from their example.

Re: his study with the future pontiff and saint, he said:

A landmark moment in his priesthood occurred in the late 1960s when Father Swiderski had the opportunity to study under Cardinal Karol Wojtyla at the Catholic University of Lublin. He remembers students flocking to the man who would become Blessed Pope John Paul II (the article was written before his canonization), as approachable and kind as he was brilliant in the classroom.

“He was charismatic, but not in an ostentatious sense. It was more the strength of his personality,” he said. “He was an inspiration in showing how much it meant for him to be with people. For me, it re-set my priorities as a priest and from then on my agenda was clear. I was to be available to the people for whatever they needed.” 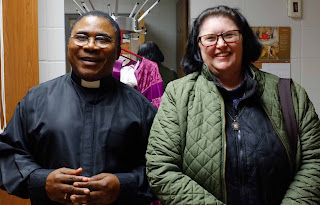 Born in 1954, Father Okeke grew up the second of three sons in Amanze Obowo in the Imo state of Nigeria. He was 5 years old when his father died and eight years later, during the civil war in Nigeria in 1967, his mother died. Eventually, he and his brothers went to an orphanage, raised by the Daughters of Mary Mother of Mercy in Avutu.

“The lesson I got from them is what made me who I am today. Because of their way of life my mind went towards becoming a priest,” Father Okeke said. “It was a promise I made to God — if he would keep us alive during the war, I would be a priest.”

It was more than a promise though; almost divine providence, given the story of his names. His mother had three children, while others did not survive. In hopes that he would live, Father Okeke was named Anabochi, meaning, “If I stay ‘til tomorrow, I will be her child,” he said.

“The name I answered during my baptism was Christopher. Then the bishop said, ‘Do you know what Christopher means? Carrying Christ over the sea.’ That’s why when you look at St. Christopher you see Christ on his shoulder and he will be looking at him,” as the patron saint of travelers, Father Okeke said. “So my bishop connected my first name and my second christened name — ‘If I stay ‘til tomorrow that I would take Christ to people.’”

I also found out more about one of the sisters from the Polish Dominican order, Sister Joachim Celinska, OP:

Growing up in Poland under Communist rule with two sisters and two brothers, her parents were members of the national underground and raised their children in the Catholic faith.

As a teenager, Sister Joachim loved Pope John Paul II and prayed his vocation prayer daily for an increase in vocations.

"I prayed every night, not realizing that Jesus had a plan for me," Sister Joachim said. . . .

"I was sitting in an empty church and had a very strong feeling. I was to give up everything I have and follow Jesus. And I did," she said. "I'm happy and would never choose another way."

She entered the Dominican Sisters of the Immaculate Conception in 1987, two years before communism fell in Poland.

I had no idea that there would be a Polish community in Mountain Home, Arkansas: it would not have entered my mind that a priest and two sisters would come from Poland to serve such a community! I've always attended rather non-ethnic or nationalist parish churches, although we do have some parishes with European backgrounds, Czech and German mostly, and of course the Vietnamese and Hispanic communities are strong here, but otherwise my experience of parish life has been rather generic. Wichita may be the larger city, but the Mountain Home community may be more cosmopolitan in some ways.

Sister Joachim concluded her interview with a wonderful statement:

"America is a beautiful country. God really loves this country because he's given freedom. We know what it's like to live under oppression. I wish and pray for all American people to take advantage of that freedom and thank God for freedom of religion, so they can express their faith freely."
Posted by Stephanie A. Mann at 12:30 AM