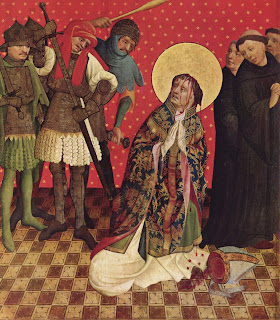 Over at the National Catholic Register, please find my post on St. Thomas of Canterbury today, on his feast. I also tell the story of St. John Stone, a martyr during another Henry's reign:

St. Thomas of Canterbury’s memorial is on December 29 within the Octave of Christmas, and his story may be familiar to many Catholics because we’ve read Chaucer’s Canterbury Tales or T.S. Eliot’s Murder in the Cathedral in school or have seen the movie Becket with Richard Burton and Peter O’Toole. There is another Canterbury martyr we should remember during this Christmastide, however, that most have probably never heard of: St. John Stone.

After describing the questioning, arrest, and execution of St. John Stone, I return to the subject of St. Thomas of Canterbury's great shrine and what Henry VIII did to it:

Therefore, in April of 1538 Henry VIII set about eradicating the legacy of St. Thomas of Canterbury in England. His shrine at the Cathedral and images of him throughout the land were to be destroyed. According to Henry, St. Thomas of Canterbury was neither a saint nor a martyr and his feasts (December 29, the date of his martyrdom and July 7, the date his relics were placed in the shrine at Canterbury in 1220) were to be removed from the liturgical calendar.

This attack on a saint proclaimed by the Church was the final blow for Pope Paul III, who issued a decree of excommunication against Henry on December 17, 1538. With these actions against St. Thomas of Canterbury, and against other saints’ shrines, including the Marian shrines throughout England, it was clear that, as far as Henry VIII was concerned, the Church had reached the point of no return.

The hanging, drawing, and quartering of St. John Stone on December 27, 1539, a year after Henry VIII’s excommunication, demonstrated that sadly, Pope Paul III was right. Friar John Stone was canonized among the 40 Martyrs of England and Wales in 1970 by Pope Paul VI.

St. Thomas of Canterbury is celebrated on the liturgical calendar of the Church of the England, honored as a martyr, on either July 7 or December 29, and people still go on pilgrimage (or as tourists) to Canterbury. What would Henry VIII think about that?

Since the first of September I've had the great opportunity to write these blog posts for the National Catholic Register. It's been a good platform for telling the story of the English Reformation and other historical or liturgical themes that are important to me. I particularly enjoy highlighting the Extraordinary Form of the Latin Rite through these posts. Looking forward to many more posts in 2017! Merry Christmas and Happy New Year!
Posted by Stephanie A. Mann at 12:30 AM