Holy Cards and the English Reformation 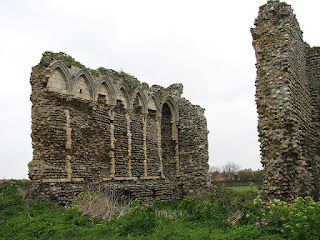 I am almost never surprised now that I'll find some connection to the English Reformation almost everywhere I look--for example, this story by Thomas Craughwell in the National Catholic Register about the history of Holy Cards:

The first holy cards were sold during the Middle Ages to pilgrims as keepsakes of their visit to a shrine. The oldest surviving holy card is a black-and-white woodcut image of St. Christopher dating from 1423. These cards were not really cards; they were pictures printed on inexpensive paper. Since they were easily lost, or torn, or destroyed, very few medieval holy cards have survived. But in 2005 one turned up unexpectedly at Holy Cross College in Worcester, Massachusetts, where the art history faculty was mounting an exhibit of artifacts and relics from the period of anti-Catholic persecution in England in the 16th and 17th centuries. Among the treasures on display was a Book of Hours that had belonged to an English family who remained faithful Catholics after Henry VIII broke with Rome. As the curators examined the prayerbook they found, pasted on the last page, a holy card from the early 1500s, hand-colored, from the shrine of the Holy Rood in Bromholm, Norfolk. Only one other Bromholm holy card has survived the iconoclasm of the English Reformation, so this discovery created a sensation among the curators and among art historians and historians of the Church during the age of the Tudors.

Although I could not find anything on-line about this particular holy card found in Worcester, Massachusetts, British History Online has these details about the other example Craughwell mentions:

There is a peculiarly interesting memorial of the subject of the Bromholm pilgrimage in a fourteenth-century 'Hours of Our Lady' in Lambeth Library. (fn. 30) To one of the pages an illuminated leaf has been attached; upon it is painted a heart, containing within it a crucifix having the two transverse beams of the patriarchal shape. Above the heart is written ' Jesus Nazarenus Rex Judeorum,' and on each side one of the two lines forming this couplet:—

This cross yat here peyntyd is
Signe of ye cros of bromholm is.

Beneath the heart in a later hand, the concluding line being partly erased:—

Within the outline of the heart and round the cross is written, in minute and much contracted characters, the following hymn, which is also given in full on an adjacent page:—

Of course, you know what happened to the priory and to the Holy Cross: they were both seized by the agents of Henry VIII. You'll note a familiar name in the report, from the same source:

The so-called visitation of Legh and Leyton, undertaken early in 1536, noted a cross called ' The Holy Cross of Bromholm,' the girdle and milk of the Virgin, and pieces of the crosses of SS. Peter and Andrew. They also alleged that Prior Lakenham and three of his monks had confessed to them their incontinency.

The county Commissioners for Suppression, later in the same year, described Bromholm as a head house of the Cluniac order, of the clear yearly value of £109 0s. 8d. They found four religious persons, all priests and requiring dispensations, adding that ' they bene of very good name and fame.' There were thirty-three other persons having a living there,' namely, four waiting servants, twenty-six labourers and hinds, and three almoners. The house was in good repair, and the bells and lead valued at £200. The movable goods, cattle, and corn were valued at £49, and a hundred acres of wood at £66 13s. 4d. (fn. 31)

On 20 February Robert Southwell, solicitor to the Court of Augmentation, had a grant made to him by royal warrant of Bromholm Priory with all its manors, lands, advowsons, and pensions. (fn. 33)

Prior Lakenham obtained a pension of twenty marks. (fn. 34)

Bromholm Priory Ruins image from Wikipedia Commons: Image credit.
Posted by Stephanie A. Mann at 12:30 AM