A Dream "Dream of Gerontius" 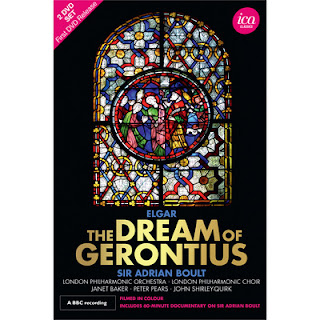 According to the publisher of this DVD, ICA Classics:

Filmed in colour from Canterbury Cathedral in 1968, this DVD represents the only existing film of Sir Adrian Boult conducting The Dream of Gerontius.

Sir Adrian Boult championed Elgar’s music throughout his life, following the composer’s prophetic words in a letter to the conductor: ‘I feel that my reputation in the future is safe in your hands’.

Featuring a stellar cast of soloists including Dame Janet Baker, this performance is redolent of Sir Adrian Boult’s ‘commendable energy and typical humanity’ (The Gramophone Guide review of Boult’s 1975 studio recording of The Dream of Gerontius).

This DVD also features a 60-minute documentary on Sir Adrian Boult produced by the BBC in 1989 to celebrate the centenary of his birth.

This review offers some background to the production of the broadcast:

Hats off to ICA Classics for an invaluable restoration of an altogether exceptional document. First broadcast on Easter Sunday, 14 April 1968, this transmission in early colour of Elgar's The Dream of Gerontius under the baton of the composer's most selfless champion represents a remarkable achievement. Producer Brian Large's original intention had been to use Worcester Cathedral, but in the end Canterbury was chosen instead: not only did the authorities agree to close the Cathedral to allow the BBC cameras unencumbered access, its proximity to London meant that the members of the chorus were able to sleep at home. Unfortunately, the Cathedral organ was out of action, so a closed-circuit link to the instrument of a nearby church was quickly set up. Filming took place over three days, the last of which entailed capturing some fascinating and rarely-seen images of the awe-inspiring Cathedral itself (and which are interwoven into the fabric of the film with great imagination).

You can find the performance online but the version posted is from a VHS tape. I think I have enough CD versions of Elgar's Dream so this is not on my wish list. I can't help, however, from pointing out that this is the story of a man dying, facing his personal judgment, and going to purgatory. It's being performed in what was once a Catholic church where people came on pilgrimage to expiate their sins and pray for the Poor Souls in purgatory--which is now an Anglican cathedral. I wonder if there was any backlash at the time against a Catholic work by a Catholic composer based upon the poetry of Catholic convert from Anglicanism being performed in the primary see of the Anglican Church, which eliminated prayer for the dead and denied the reality--and the hope--of purgatory?
Posted by Stephanie A. Mann at 12:30 AM