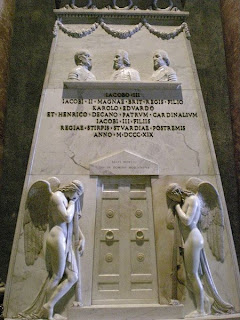 Henry Benedict Stuart, second son of the Old Pretender, James III (James Francis Edward Stuart) and Maria Klementyna Sobieska, died on July 13, 1807. He was born on March 11, 1725 (NS) in Rome, where the Pretender lived after the failure of the Jacobite plots of 1715. The French Court of King Louis XV had not welcomed him as King Louis XIV had.

His mother left his father soon after Henry's birth, accusing him of infidelity and residing in a convent. They reconciled two years later, but Maria Klementyna died in 1735, ten years before her sons made the great attempt to retake the throne in 1745.

When that attempt failed, Henry returned to Rome and began his ecclesiastical career during the reign of Pope Benedict XIV, progressing through the minor orders while a Cardinal-Deacon in 1747 and the sub-deaconate in 1748 and then being ordained deacon and priest in 1748. He became the Cardinal-Bishop of Frascati, a diocese near Rome in 1761. He was quite wealthy with many properties and benefices, but he lost it all during the French Revolution and in support of Pope Pius VI, who was imprisoned by Napoleon and died in August of 1799. The College of Cardinals, with Cardinal Henry Stuart met in exile in Venice to elect Pope Pius VII in the contentious papal election of 1800.

In the meantime, when his brother Bonnie Prince Charlie died in 1788, the Cardinal had become the de facto Pretender, but he did not seek the throne and was not recognized by the Papacy, being called the Cardinal Duke of York. His priesthood and cardinalate really made it impossible for him to seriously be considered a candidate, anyway. While his brother had been roaming throughout Europe, even visiting England and renouncing his Catholicism (briefly) for any advantages in his attempt to regain the throne, Henry Cardinal York's path probably disappointed the Young Pretender, especially as he had no legitimate heirs.

In 1803, the Cardinal Duke of York returned to Frascati and became Dean of the College of Cardinals. He died on July 13, 1807 when he was 82 years old. The line of the Pretenders was taken up by Charles Emmanuel IV of Sardinia who was the grandson of Charles II's favorite sister, Henrietta Anne, wife of Louis XIV's brother Philippe of France, Monsieur. Charles Emmanuel IV never actively sought the throne of England. The Cardinal, his mother, his father, and his brother are all buried in the crypt of St. Peter's Basilica in Rome. (There is a separate memorial for Maria Klementyna Sobieska.) The inscription reads:

(To James III, son of King James II of Great Britain, to Charles Edward and to Henry, Dean of the Cardinal Fathers, sons of James III, the last of the Royal House of Stuart. 1819). More about the monument here.
Posted by Stephanie A. Mann at 2:01 AM