The Trial of St. Thomas More 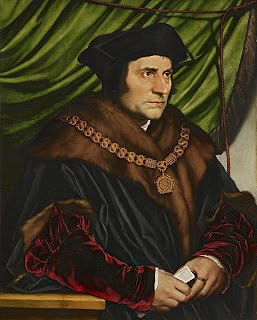 Remember that Pope Benedict XVI spoke of St. Thomas More during his speech in Westminster Hall on September 17, 2010:

As I speak to you in this historic setting, I think of the countless men and women down the centuries who have played their part in the momentous events that have taken place within these walls and have shaped the lives of many generations of Britons, and others besides. In particular, I recall the figure of Saint Thomas More, the great English scholar and statesman, who is admired by believers and non-believers alike for the integrity with which he followed his conscience, even at the cost of displeasing the sovereign whose “good servant” he was, because he chose to serve God first. The dilemma which faced More in those difficult times, the perennial question of the relationship between what is owed to Caesar and what is owed to God, allows me the opportunity to reflect with you briefly on the proper place of religious belief within the political process. . . .

And yet the fundamental questions at stake in Thomas More’s trial continue to present themselves in ever-changing terms as new social conditions emerge. Each generation, as it seeks to advance the common good, must ask anew: what are the requirements that governments may reasonably impose upon citizens, and how far do they extend? By appeal to what authority can moral dilemmas be resolved? These questions take us directly to the ethical foundations of civil discourse. If the moral principles underpinning the democratic process are themselves determined by nothing more solid than social consensus, then the fragility of the process becomes all too evident - herein lies the real challenge for democracy.
Posted by Stephanie A. Mann at 2:10 AM